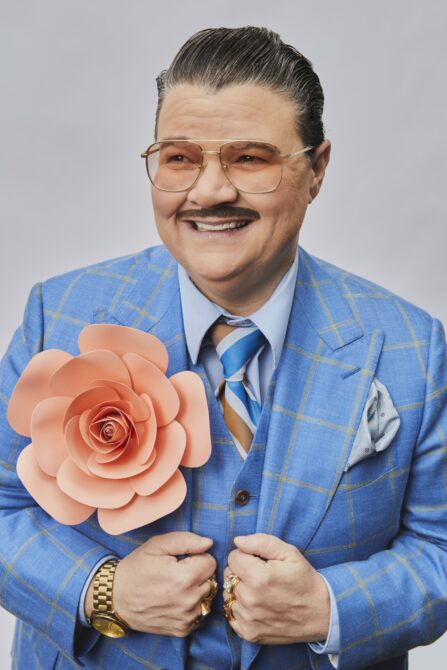 There’s a moment in the HBO series “Somebody Somewhere” that speaks to exactly who Murray Hill—comic, cabaret performer, and actor—really is.

A few episodes in, Hill—playing soil scientist and late-night emcee Fred Rococo—is out to brunch with his new friend Sam (Hill’s real-life bestie, Bridget Everett.) The two are settling up the bill when a waiter expresses confusion around Rococo’s gender. “Sir, I’m sorry, ma’am,” the waiter says, stumbling over their words.

But Rococo doesn’t flinch. He’s been here before.

“Don’t worry,” he says amiably. “You had it right the first time.” He leaves a large tip and goes back about his business. It’s just another day in his life, a life which probably holds many of these types of awkward interactions.

In previous scenes, we’ve encountered Fred Rococo in outfits and atmospheres much closer to the Murray Hill persona: usually in a loud, wonderfully-campy suit jacket, large glasses, and playing the role of lovable, corny emcee to practiced perfection. But in “Somebody Somewhere,” we’re able to see another side of the iconic cabaret performer.

As Fred Rococo, Hill lets us into his other life: the part that must be lived without the armor of campy fashion and queer community. When the lights go off, when the stage empties, transmascs are left in a confusing, often painful in-between in our everyday lives.

Maybe we’re wearing a sh*tty t shirt and sweatpants to the liquor store, or maybe we’re going out to brunch in a more dressed-down look. We get misgendered, ignored, or looked over. We’re being seen by the world on its own limited and limiting terms, and that can make the mere prospect of going outside feel awful.

Either that, or it can feel like being invisible.

The wonderful thing about Murray Hill becoming famous at this moment–“famous” as in known to people outside of New York, where he’s been an institution for decades–is that people like him don’t often get to be seen. Not just seen physically, as Hill is now in two major supporting roles on prestige TV shows: “Somebody Somewhere” on HBO and Hulu’s Amy Schumer vehicle “Life & Beth”, but in the more practical way as it relates to transmascs over the age of 25.

Today, it’s becoming more common to see transmasculine actors and masc-of-center nonbinary performers like Theo Germaine and Vico Ortiz get screen time. But the representation, sadly, seems to stop at around age 30.

Hill, who turned 50 last year, is one of the few examples of a transmasc elder who can be seen thriving, acting, being himself, and providing a sense of possibility for what trans visibility might look like as we get older.

In an industry that celebrates trans folks when we look the way they want us to (young, white, thin, pretty) it’s hard to find examples of elders onscreen, unless they’re cast in tragic roles. But Hill defies all that. He’s the closest thing we have–and have ever had–to showing what transmasculinity looks like after 40, in a small town (like Manhattan, Kansas, where “Somebody, Somewhere” takes place) as an unassuming yet integral member of a community. Maybe it shouldn’t be so moving, but it is. And Hill makes it look easy.

That’s not to say it has been easy for him, because of course it hasn’t. When Hill was coming up in New York’s cabaret scene, he documented the city’s nightlife as a behind-the-scenes photographer and appreciator of all things cabaret.

He met other New York icons like Justin Vivian Bond, Lady Bunny, Lypsyncka, and of course, the inimitable Bridget Everett, who would become Hill’s best friend shortly after their meeting. In the mid-90s, Hill even made a bid for mayor of New York City (he didn’t win, but we can still dream.)

Since escaping a conservative New England upbringing and moving to Manhattan to name himself after one of the city’s classiest midtown neighborhoods, he became the ultimate New Yorker: someone whose name recognition disappears somewhere in the middle of the Taconic parkway.

Talking to TODAY, Hill referred to his newfound fame as “the longest overnight success story in show business.” But there’s more to it than that: to see Hill is to love him, and his community in New York—as well as his current TV roles—are a pure testament to that. After a fire destroyed his apartment right after his 50th birthday last year, friends, colleagues, and strangers showed up to help Hill rebuild his life and start over.

“Everybody showed up for me,” Hill told TODAY. “Everyone, except my own biological family. The touching part was it goes back to that community feeling within the clubs in Boston. This world — this queer community and world that I created, am a part of and lived in — is what helped me out and literally saved me.”

Now he’s saving a new generation of trans guys who never had a chance to see a future for themselves. He’s showing us something else, too: that the future waiting for us might be painful and hard, but it’s also bright, exciting, and better than anything we could have imagined.