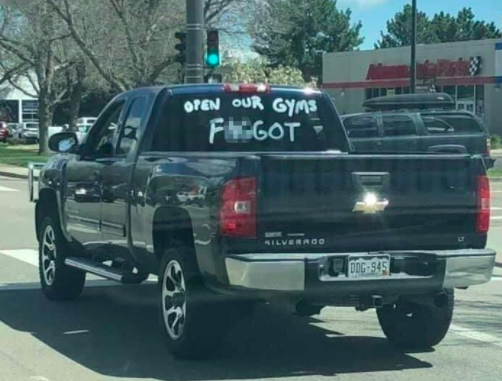 An anti-lockdown protestor from Colorado is pissed he can’t go to the gym, so he’s taken to writing homophobic graffiti on his pickup truck and cruising around town.

Last Sunday, Michael Drewer drove up and down the streets of Loveland, Colorado with a message to Colorado Governor Jared Polis painted on the back of his Chevy Silverado.

Earlier in the week, Polis, who is openly gay, announced that “businesses such as gyms and nightclubs are highly social and a timeline on those has not been determined yet. Some gyms are open to appointment-only personal training for now.”

Michael Dean Drewer is a 61 year old man from Loveland, Colorado was seen driving with “OPEN OUR GYMS F**GOT” written on the back of his truck to support a Reopen Colorado protest directed at Colorado’s (gay) governor Jared Polis on Sunday. pic.twitter.com/fJMQeZ5kKJ

The 61-year-old’s vehicle was photographed driving to a Reopen Colorado protest and identified by a local Antifa group.

“He’s a boring and bigoted man living a sad life, whose only joy seems to come from skipping leg day, calling gay people slurs, and spreading viruses,” the group said.

LGBTQ Nation notes that, on his personal Facebook page, Drewer has lots of pictures of himself wearing tight-fitting Confederate flag muscle shirts, and he frequently posts photos showing off his ripped bod.

So, clearly, going to the gym is very important to him.

Many states have temporarily closed gyms since they are considered high to medium risk places when it comes to the spread of coronavirus.

Gym-goers share equipment, which is often not properly sterilized in between uses, and it can be difficult to keep a safe six-feet apart because of crowding. Not to mention, showers and steam rooms can easily become breeding ground for all sorts of contagions.

Related: An open letter to gay men desperate to use the gym