The queer-laden Cape Cod destination of Provincetown has been itching to get back to abnormal, with a bevy of tucking, singing, and shticking, but the summer uptick in covid cases (due to the Delta variant) threatened to make things more cautious than carefree.

The town enacted an indoor mask mandate on July 25 and things got more manageable, so my trip there was full Speedo ahead (or full caftan ahead, anyway) and I happened to unearth some giddy drag highlights that lifted the throngs out of the fear zone. For safety, the drag stars weren’t on the street hawking their shows as usual, and they also didn’t do the customary meet-and-greets after their performances, but they did the shows themselves and that’s what matters! 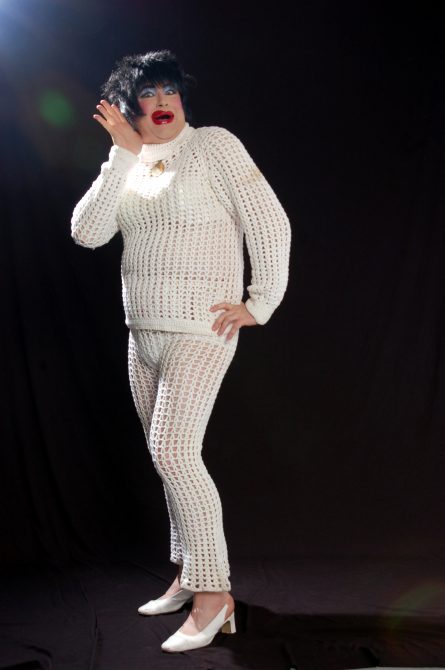 The surreally funny Dina Martina is a “jift” to anyone who appreciates drag used as a conduit for subversive comedy of the highest order.

In her “emotionally distanced” but spiritually uplifting Chariots of Failure show, poolside at the Crown & Anchor, the alarmingly made-up Dina entered in a neck brace and crutches, explaining, “I slipped on cat food. And I don’t even have a cat. A girl’s gotta eat.” Her gargly renditions of “All Night Long” and “Takin’ It To The Streets” (complete with vocoder effects) were quite stimulating, and her tales of friendship with Charo and falling in love with a Swedish ice skater can’t be aptly described via mere human language.

The dizzying Dina will appear in an upcoming issue of Town & Country magazine, alongside one of their cover subjects, John Waters. (I just orgasmed while typing that.) I’m also happy to report that Dina—who inventively used masks as toilet paper during lockdown—got the Duncan Hines vaccine, though she also managed to walk away with the Moderna douche and the Pfizer enema.

“Ptown’s favorite non-essential twerker,” Varla (a/k/a Jeffery Roberson) is a long-running star with musical and comedy chops for days. Her Little Prick show, poolside at the Crown & Anchor, had her entering as a syringe (though for a second, I thought she was the Tin Man, lol) and changing into a succession of equally glorious ensembles while serving show biz pizazz on the “upscale patio.” The pandemic was her–and musical director Gerald Goode’s–focus as she sang, “2020 brought us all to tears/We were locked up like Britney Spears” and made an old disco ditty into a vaccination anthem called “Turn Your Butt Around.” (Also, “Smooth Operator” deftly became “Cruel Ventilator”.) Varla admonished the hypocritical gays who “wouldn’t eat out at a restaurant, but you’d eat a stranger’s butt”.

She also targeted science-defying heteros by saying, “Half the population hasn’t been vaccinated and I don’t want to offend you straight people, but this time its YOU.” (One of the best things about Ptown is that, like the world of John Waters, it reverses things and puts gays on top and straights in the hot seat. It’s all very refreshing—and true.) There were funny video montages and Varla then treated us to her version of “Under The Sea”, about the treacherous Herring Cove beach nearby. (“Under the seaweed, someone just wee-weed….”)

Little Prick made me hard. And by the way, Varla said she’s married to the head of security at Crown & Anchor and they live in Fort Lauderdale, which makes her “totally available!”

The glamorous Anita hosts the fast-paced Anita Cocktail Variety Hour at Post Office Cabaret and the night I attended, I fell in love with her and all the other drag performers—brassy Jacqueline DiMera, fierce LaDiva Jonz, and saucy Haley Star, all of them kicking ass with their solo turns, as well as the group number, “I’m a Woman (W-O-M-A-N)”. Best of all, Anita ended the romp with a beautifully sung (not lip-synced) “I Honestly Love You.” Backatcha, lady.

Ptown legend Ryan Landry (Gold Dust Orphans) presents this weekly talent contest, which on August 9 drew faves like Barbra interpreter Joanna James and guest stars like the witty comedy trio Unitard. I did my naughty version of “Something Stupid” (“But then you go and spoil it all by eating something stupid like my asshole”) and I’m sure the only reason I didn’t win the grand prize was that I was out of competition! Right? Anyway, some little girl with a loud voice won. Congrats to her—and thank god she didn’t hear my performance.

At the Crown & Anchor piano bar [which is now al fresco], tireless player/singer Bobby Wetherbee was on fire with spunky renditions of standards, which he would amusingly speed up and slow down at will. “I’m not supposed to like Andrew Lloyd Webber,” Wetherbee exulted at one point. “But I’m 79 and I don’t give a shit!”

I also ran into Broadway star Raul Esparza, who had guested with Kristin Chenoweth on “Defying Gravity” during Kristin’s Town Hall show the night before. And that’s as Provincetown as it gets.

I’m now back in NYC, on the ground and wiping myself off.