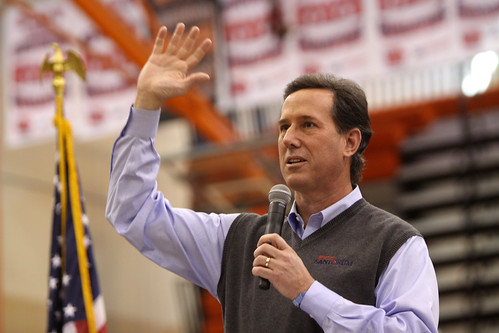 Rick Santorum, the former Senator from Froth and now the leading non-Romney in the GOP presidential race, went to college Thursday and flunked out. At College Convention 2012, a forum organized by New England College, Santorum lapsed into an extended and testy debate about the validity of marriage equality.
When faced with a series of questions from students (who were much more dogged than most reporters) about Santorum’s opposition to marriage equality—which Santorum once likened to man-on-dog sex, no matter how much he tries to deny it—Santorum immediately took to the battlements by saying that gay marriage is like polygamy (and subtly suggesting that Romney’s Mormon ancestor had something in common with modern-day gays).

At first, perhaps mistaking himself for an actual educator, Santorum lectured the students. He kept challenging them to prove why marriage needed to be, well, equal. “Don’t you have to make the positive argument why the law should be changed?” he asked. When one woman suggested that same-sex couples have the same rights to happiness as anyone else, Santorum decided to move from the pompous to the offensive. “If you’re not happy unless you’re married to five other people, is that okay?” he asked. The women had the temerity to call Santorum on his bullshit, pointing out, as any good professor would to a wayward pupil, that the bigamy issue is “irrelevant.”

Then she continued, “But when two men want to marry … ”

“That’s not what I’m talking about,” the woman shot back.

Meanwhile,  the audience booed Santorum and shouted out their own responses to the knuckle-dragging questions he posed. This allowed Santorum, who has cornered the market on sanctimonious, to chastise the crowd for expressing their displeasure at such naked homophobia. “I’m going to give people one more chance and then we are going to move on,” he said at one point.  Eventually, the discussion ended, but when Santorum left the students, they roundly booed him.

The episode underscored two problems, one for Santorum and one for Republicans in general. Santorum’s comments are well in line with everything he’s always said about gay marriage, but since his almost first-place finish in Iowa, the mainstream media will be paying attention to everything he says (until he implodes like all the other non-Romneys did). That means that nasty little episodes like this one that would never have gotten any press will be receiving wide play and help paint Santorum as a pompous and hate-filled jerk. (Who says the mainstream media doesn’t get things right occasionally?)

The bigger problem is for the GOP. Until they rid themselves of rabid homophobes like Santorum, Republicans have little chance of capturing a younger demographic. The bipartisan Freedom to Marry study from last summer found that 68% of 18 to 29 year-olds support gay marriage. Basically, the only group that supports Santorum’s position are those 65 and older, and even a third of that group favor marriage equality. As the report said, “As generational change occurs, we expect that the numbers will continue to shift in support.”

The only Republican candidate who draws young voters is Ron Paul, largely because his libertarian philosophy allows some people to delude themselves into believe he’s actually liberal on social issues. While senior citizens may be more likely to vote than young people, you can’t stop the clock from ticking. At some point soon the Republicans have to face up to the fact that the voting population won’t stand from Santorum-like rhetoric, at least not if they want to be a majority party. But then, as Santorum’s career illustrates, perhaps the party will gladly hold onto its reprehensible principles even as it marches off a cliff.