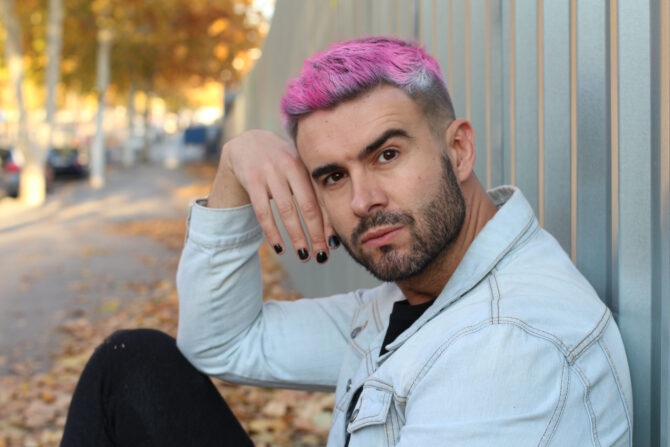 Over the pandemic, more and more men – gay and straight alike – are cozying up to intensive grooming rituals. And that includes the male manicure – the “menicure,” if you will.

We’ve seen it all over Hollywood these past few years, with male celebs normalizing painted nails on the red carpet. Now, nail art for men is taking Tiktok and Instagram by storm. Esquire even dubbed 2020 the “Year of the Menicure.”

No longer is nail polish for men who go against the tide. You don’t need to be emo to be in black nail polish, nor do you need to get up in drag to sport stiletto nails. In fact, the tide is shifting toward a new era of painted nails being unisex and accessible. The menicure is no longer tied down by sexual orientation or subculture – it’s just style.

So how did we get here? Why do men paint their nails black, blue, or even pastel? ​​You could chalk it up to pandemic boredom. More guys experimenting and coloring their nails while stuck indoors from a forced lockdown. Perhaps it’s also due to Gen Z and their polarizing effect on gender norms. That, and the many high-profile celebrities we’ve seen grace the red carpet with perfectly painted nails.

There’s now a collective acceptance of gender fluidity. Men are recognizing that it’s okay to blur the lines and not play by the rules. Let’s admit it, being “masculine” is so restrictive sometimes, and it feels good just to break free from all that pressure.

A History Of Painted Nails

Men wearing nail polish isn’t exactly new. Historically, men have been painting their nails as early as 3,200 B.C. Back then in Babylon, warriors put war paint not just on their faces but also on their nails. There’s also evidence that men wore nail polish in ancient Egypt and ancient China.

Over time, the lacquered fingernail became a female-targeted accessory. Then came the opening of America’s first nail salon in the 1800s to the invention of liquid polish in the 1900s, making nail polish and nail art accessible to the masses.

By the ’70s and ’80s, glam rock and punk rock superstars made the man-icure a symbol of the counterculture. Case in point: icons like David Bowie circa Ziggy Stardust, Iggy Pop, and Lou Reed and his black polish, and Kurt Cobain in the ’90s with grungy chipped polish on his hands. These artists inspired many a guy going through a punk phase to dabble at painting their own nails for a boost of rebellious confidence.

By the late 2010s, fashion magazines began weighing in on the manicure for men. Many doubted its longevity and, well, they’ve been proven wrong. In 2019, men painting their nails shifted into the mainstream. That same year, Queer Eye grooming expert Jonathan Van Ness became the first male brand ambassador for Essie.

This wouldn’t be a list of good nail polish for men without mentioning Harry Styles. He’s rarely seen without a coat of color on his nails. Of course, there’s also Lil Nas X, known for his flamboyant style and makeup.

But up until this point, men’s nail polish still carried with it the “stigma” of it being for girls or at most gay, non-binary, or trans men and women. That is, until the media picked up on rapper A$AP Rocky and his next-level nail art.

One iconic moment was when he sported smiley faces on his nails. “I feel like men should be able to do nail art without feeling feminine,“ A$AP Rocky said in a Vogue interview. We saw other male celebrities follow suit: Bad Bunny, Lil Yachty, Post Malone, and even Pete Davidson.

Nail Polish For Men, By Men

Looking for an understated clear polish or perhaps a more vibrant coat of color? There’s a bunch of brands out there now, for men and by men. Just pick up a color or two from some of these best nail polish brands, launched by our faves.

Harry Styles’s genderless nail polish line, Pleasing, launched in November of 2021. We’d like to argue that this was the catalyst for male celebs launching their own nail polish brands.

Given the former One Direction star is known for his non-binary style choices paired with vibrantly polished nails, the “life brand” was designed to “dispel the myth of a binary existence.” You can see it in the brand’s lookbook, where nail polishes are shown on a diverse set of hands – women, men, even older folk can “find their Pleasing.”

Currently, there are four shades in finishes from matte to pearlescent. Altogether, the line makes for endless color combinations. A huge bonus: the formula is sustainable, vegan, and cruelty-free.

Honestly, MGK’s got major nail game. So it only makes sense for him to get into the beauty industry via nail polish. Enter UN/DN LAQR – pronounced “Undone Lacquer” – which just launched in December 2021.

From shades like “Depressionist” and “Mary Jane” to a nail kit called “Therapy Sessions,” UN/DN LAQR is an extension of Machine Gun Kelly’s disruptive personality and style. It’s reminiscent of the pop punk-slash-emo era of the early aughts, all about self-expression and attitude.

No matter your orientation or preference, just keep creating yourself. As the website says, “No permission needed.”

Lil Yachty launched Crete last year in May but left it in November short of a new drop. Granted, Lil Yachty’s stint at the helm of his own nail polish brand Crete was short-lived. But that doesn’t take away from what the brand stands for: that nail polish and nail art has no gender. Nail polish for men is and should be accessible and inclusive. And it shows even down to Crete’s innovative packaging–a retractable Nail Paint Pen, as opposed to a bottle of polish.

Lil Yachty created Crete after hearing about Trevor Wilkinson getting suspended from school just for wearing nail polish. As a brand, Crete aims to redefine the norm and change the perception of masculinity. More unisex, more self-expressive, less binary. It’s simple self-care – “kind of just like getting a haircut,” as Yachty said while speaking to the Washington Post.

When asked about his inspiration behind venturing into beauty, Tyler, the Creator simply sees it as another avenue for creativity. Again with our recurring theme of self-expression overcoming gender rules. “I like to wear glitter nail polish a lot, so I wanted to make a few colors that I rarely get to see. That’s all it is,” Tyler, the Creator said in an interview with Allure. “It is less wanting in on [the] beauty world and more, ‘Oh, I want to try my hand at this.’”

Final Thoughts: Is The “Menicure” Here To Stay?

Let’s face it: nail polish on men is so hot right now. And honestly, we don’t think it’s going away any time soon. We live in an age where beauty is self-expression, and it’s for everyone.

Men are becoming more comfortable getting manicures. We’re shifting away from metrosexuality and toward a more inclusive and expressive new normal. Nail care and nail polish aren’t reserved for the gay man or the feminine type anymore – getting a manicure should be as normal as styling your hair. It’s just grooming.

And seriously, who even wants crusty cuticles these days?