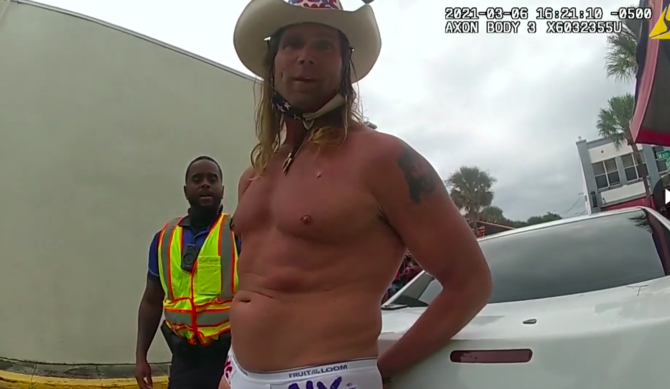 Despite the fact that we’re still in the middle of a global pandemic, hundreds of thousands of people are currently in Daytona Beach, Florida for Daytona Beach Bike Week. Among them is Robert Burck, a.k.a. “The Naked Cowboy.”

The 51-year-old New York street artist is known for performing in Times Square in his underpants, cowboy hat, and cowboy boots. This week, he brought his act, along with his “Naked Cowgirl” wife, to Daytona Beach.

But when police accused him of panhandling yesterday, things got a little crazy.

Body cam footage shows officers arresting Burck after he continued taking money from people on the street despite being told it was against the law. Officers also said he wasn’t social distancing and that he was attracting a large crowd.

And that’s when things got crazy.

“So the Blacks can walk around and take tips all day long but I don’t want anything about that,” Burck says in the video.

“Excuse me? Excuse me?” the officer replies

“I don’t care. You heard me, yeah, you heard me. I don’t want money from them. I’m already rich. I don’t give a f*ck about the money. You can break the guitar and give it to all the Black people,” Burck answers.

Things take another turn for the worst when Burck tries walking away and gets pushed back against the police car, causing his guitar strap to snap. That’s when he starts shouting homophobic slurs at the officer.

After he has calmed down, Burck apologizes for calling the woman the slur, then says, “You can call me a d*ke.”

“I don’t talk to people like that,” she replies.