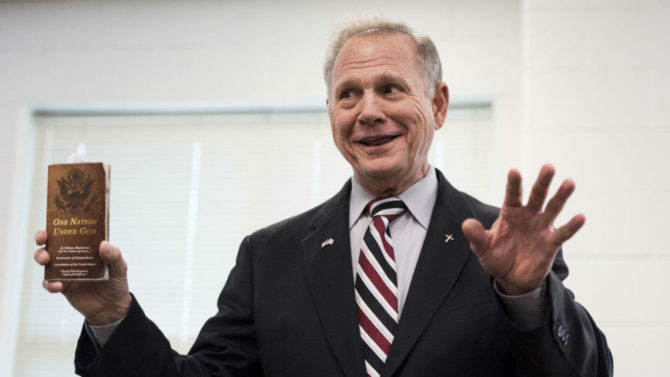 As the nation grapples with how to handle the current coronavirus outbreak spreading across the country, Roy Moore has just launched a campaign to end same-sex marriage in America because… priorities!

The alleged child molester, who recently came in fourth-place in the Alabama GOP Senate primary, is currently petitioning the U.S. Supreme Court to overturn its 2015 Obergefell decision that legalized same-sex marriage nationwide.

“The Supreme Court’s decision in Obergefell could not be logically deduced from the text of the Constitution or found in the longstanding traditions of our people,” Moore’s nonprofit, the Foundation for Moral Law, writes in a friend-of-the-court brief on behalf of Kim Davis. (Remember her?)

The brief, filed yesterday, continues: “Obergefell not only perverted the Constitution and changed the definition of marriage, but it also jeopardized the religious liberty of Kim Davis and millions of Americans who object to same-sex marriage.”

The brief goes on to argue that Justice Anthony Kennedy, who authored the court’s 5-4 Obergefell decision in 2015, has since retired and been replaced by Brett Kavanaugh, who probably wouldn’t have voted to legalize same-sex marriage if he had been on the court at the time, and so the whole thing should be retried.

“Now that Justice Kavanaugh has replaced Justice Kennedy, we hope that the Supreme Court will once again allow the states to recognize marriage for what it is: a union between one man and one woman for life,” the brief states.

The Foundation for Moral Law is based in Montgomery and was founded in 2003. It is currently helmed by Moore’s wife, Kayla.

Also in 2017, it filed an amicus brief in the case Gloucester County School Board v. G.G., voicing its opposition to transgender rights.

And just last December, it filed a brief challenging Maryland’s ban on conversion therapy for minors, arguing that “many young people want to be delivered from homosexual desires because of their religious convictions.”

Related: Roy Moore calls for a return to ‘moral’ times, before same-sex marriage