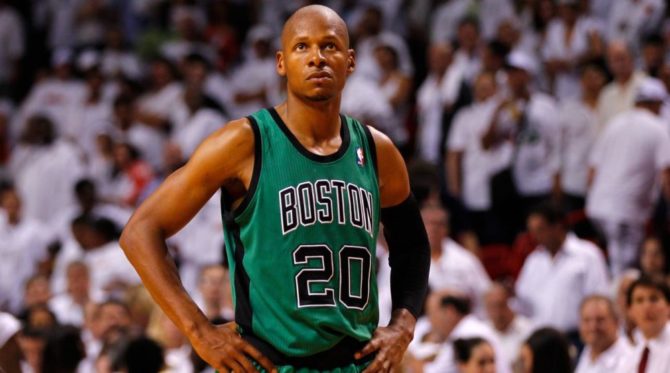 Former NBA superstar Ray Allen has found himself at the center of a gay sex scandal. Now, he’s hoping the court will help set the record straight (no pun intended).

The legal skirmish involves Allen and another guy named Bryant Coleman, who claims he was in a three-year sexual relationship with the retired athlete.

42-year-old Allen, who is married, doesn’t exactly deny the relationship; however, he insists the details aren’t accurate and that he’s not gay.

According to Allen, when he first met Coleman online, Coleman pretended to be a woman. The two chatted briefly but never actually met. After learning Coleman was, in fact, a male, Allen immediately cut ties.

“Ray regrets ever engaging with this person online and is thankful they never met in person,” Allen’s attorney, David Oscar Markus, tells the Associated Press.

But Coleman says otherwise. He tells TMZ Sports, “[Ray’s] account of our relationship is false. Ray knows how I look, he knows how my voice sounds, he knows how I think, and most importantly, he knows my heart.”

After the alleged relationship ended, Coleman says Allen began stalking him. In addition to spying on him, he says the NBA star told him to “watch your back” and made threatening late night phone calls in which he threatened to strangle him.

Court documents indicated that Coleman was previously granted a restraining order against the NBA star for stalking him.

But Allen claims it’s the other way around. He says Coleman has been stalking him.

Last week, Allen filed an emergency motion with the court to stop Coleman from contacting him or his family.

“This experience has negatively impacted Ray, and he hopes that others might use his mistake to learn the dangers of communicating online with strangers,” his lawyer says.

Allen’s lawyer went on to say that his client “wants nothing to do with Mr. Coleman” who he says “obviously has some serious issues with understanding the difference between fact and fantasy.”