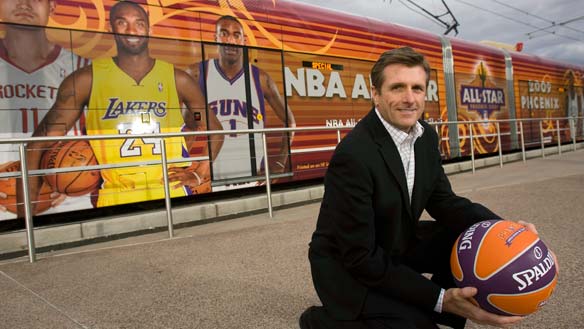 The pair have been together nine years and tied the knot at San Francisco city hall. Welts announced the ceremony on Twitter. Mayor London Breed performed the ceremony herself.

“At 11am today in the Mayor’s office at SF City Hall,” Welts tweeted, “Mayor @LondonBreed married Rick Welts and Todd Gage. It was a good day, nine years in the making!”

At 11am today in the Mayor’s office at SF City Hall, Mayor @LondonBreed married Rick Welts and Todd Gage. It was a good day, nine years in the making! pic.twitter.com/NiiVN255eG

Welts came out in 2011, making him one of the earliest team presidents to come out of the closet. Under his tenure, the Warriors have appeared in five straight (pardon the expression) NBA Finals, and won three championships–quite an achievement.

Since his coming out, Welts has spoken out about the pain of having to hide his personal life from view. His relationship of almost 20 years ended in 1994 when his partner died of AIDS. Another, which lasted from 1995 to 2009, ended in large part to Welts’ staying in the closet. For those reasons, at least in part, Welts also joined the advisory board of You Can Play, an activist organization dedicated to fighting homophobia in sports.