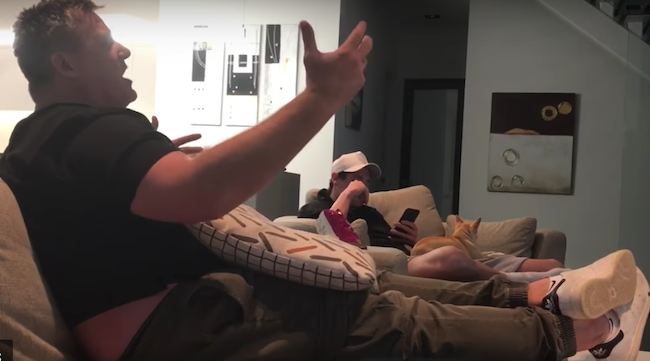 It’s a caustic speech from an Australian fellow who’s jolly cross about the state of marriage equality in his country, and it’s deservedly going viral.

Related: United Airlines detained this gay dad for having his hands “too close” to son’s genitals

As the government preps to put the issue to a non-binding public vote in September, Mark Orval of Melbourne – who’s been monikered “Angry Dad” for his various vitriolic rantings – goes off on all the drama, conflama, etc.

And people are listening, too: The vid’s already racked up three million views.

“Don’t fucking start me on that shit,” Orval shouts.

“They’re spending $122 fucking million on that—to have us fucking vote as to whether they should allow gay marriage. Whose business is it of the fucking politicians to say who we can fucking marry and can’t marry?”

He then notes that $97 million could help “sick kids with cancer” and says that if politicians want this vote, they should take the cash out of their pensions.

“They won’t do it, ’cause they hide behind parliamentary privilege and all that shit….

Even then if the public come back and say mind your own business,’ as we should, they don’t have to pass it. People might say ‘yes, approve it’ [but]… they can just park it and say: ‘Now we know how you fucking think, but we’re not going to actually listen to you,’ like they do with every other fucking policy….

What’s the fucking point? Why don’t they deal with real issues?”

Time to make a change I reckon, these politicians are clearly doin something wrong!Fuck it – ANGRYDAD FOR PM! #AD4PM 🌈Shirts available in comments, let's stir some shit up! Make sure you hashtag #AD4PM

And now, here’s that rant, as promised: