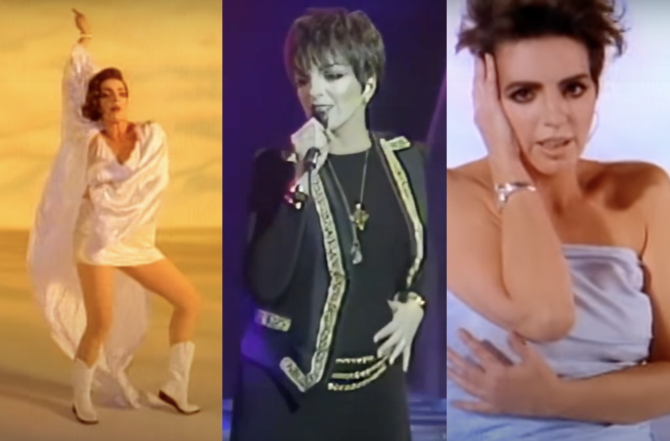 Liza Minnelli made a rare appearance alongside Lady Gaga at the 94th Academy Awards on Sunday night to present the Best Picture category. She was also there to commemorate the 50th anniversary of her movie Cabaret, for which she won an Oscar in 1972.

While Liza is primarily known for singing showtunes, in 1989, she recorded a dance album called Results. It was a complete departure from her previous efforts and arguably one of the gayest things she’s ever done, which, we know, is saying a lot.

Results was produced by the Pet Shop Boys and Australian music producer Julian Mendelsohn, whose credits include a number of queer artists, including Pet Shop Boys, Dusty Springfield, and Elton John.

The album was an odd mishmash of unexpected material and wasn’t a hit in the US, but it reached #6 in the UK, spawning four singles, including an electronic re-working of Stephen Sondheim’s “Losing My Mind”.

Liza followed that up with the single “Don’t Drop Bombs”, another electronic track, influenced by Bananarama’s “Venus”, Michael Jackson’s “Thriller”, and the Broadway melody ballet from Singin’ in the Rain.

From there, Liza chose “So Sorry, I Said”, a mid-tempo ballad, for the album’s third single. The video showed her looking stunning in a black gown with a plunging neckline while standing alone in the middle of an empty theater.

The fourth and final single off Results was a cover of “Love Pains”, which was originally recorded by musical theater actress Yvonne Elliman in 1979. Liza didn’t record a video for the song, but she did perform it on Top of the Pops and released several different club remixes.

Results remains Liza’s only full-on dance album, described by Pitchfork as “a fascinating, addled mix of show tunes, strings, and 808s that coalesces in a mood of chic Upper East Side regret.”

After its release, she would go on to star in the 1991 musical film Stepping Out. Her next album, Gently, would be a return to form. Released in 1996, it featured American standards and show tunes.

Stream Results on Spotify, Amazon, or wherever you listen to music.