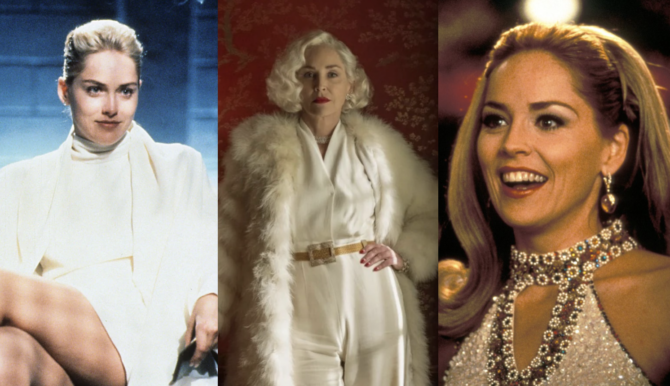 Oscar-nominated screen star Sharon Stone turns 64 today, and what can we say? We’re in love.

For the uninformed, Stone has made a career out of playing bombshell, sexually liberated characters, including a few queers (more on that in a moment). Off-camera, she’s proven herself a staunch and devoted ally to the LGBTQ community, having raised tens of millions of dollars for AIDS research.

Now, that’s what we call a friend!

In honor of Ms. Stone’s 64 circles around the sun, we’ve put together five essential moments from her career, on-screen and off, that encapsulates her power and appeal as an actress and activist.

Stone went from sex symbol to serious actress in 1995 with her performance in Martin Scorsese’s Casino. She played a strong-willed sex worker named Ginger and won raves from audiences and critics alike. The part also nabbed her an Oscar nom for Best Actress. Viewed today, it reveals just how much power Stone has in front of the camera. She steals the movie right out from under her veteran co-stars Robert DeNiro, Joe Pesci, and James Woods.

If These Walls Could Talk 2

Stone took another massive risk in 2000 when she starred opposite then-pariah Ellen DeGeneres in If These Walls Could Talk 2. The anthology film details the lives of lesbian couples living in different eras. Stone and DeGeneres’ story concerns a couple trying to have a baby, which was still a very hot button subject at the time. For that matter, so was playing a lesbian on-screen in a movie with a lesbian co-star, and a queer director (Ellen’s then-girlfriend Anne Heche). Laura Dern didn’t work for a year after playing Ellen’s girlfriend in a single episode of her sitcom. Stone took a massive risk in accepting the part, and struck a blow for queer visibility by doing so.

OK, so Ms. Stone only plays a supporting role in this story, but it’s still one of the funniest about the actress and her HIV/AIDS activism out there. Comic Kathy Griffin loves to tell a tale about Stone doing a dramatic reading of the lyrics to John Lennon’s “Imagine,” which left attendees Rosie O’Donnell and Nathan Lane in stitches. Griffin then got up and did a dramatic reading of the lyrics to “Hound Dog,” which made the audience howl. Stone, ever the good sport, cackled right along with them.

Her relationship with her acting teacher, Roy London

Stone hangs her success as an actress on her relationship with Roy London, a legendary acting coach. London was openly gay in the 1980s and ’90s, and died of AIDS in 1993. Stone helped care for him in his final days, and let their relationship inspire her to action as an activist for gay rights and HIV/AIDS causes. That folks, makes her more than a great actress; it makes her a hero.