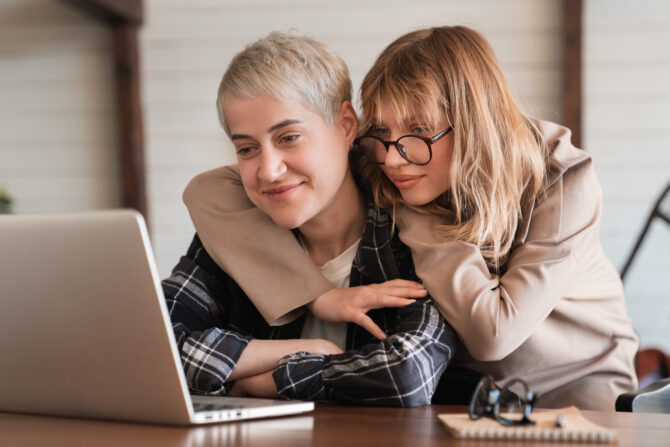 Recently, people have become more open about talking about gender, sexuality, and the incredible spectrum that holds all our diverse identities. Terms like “genderfluid”, “non-binary”, and “intersex” are gradually making their way into mainstream discussions. However, there are still some identities and sexualities that aren’t as well-known, such as the neptunic sexuality.

What does neptunic mean? Who are neptunics attracted to? Is there an official day to celebrate the neptunic community? Read on for the answers to these questions and learn more about this sexual identity!

RELATED: Being Bisexual+ & Nonbinary While Rejecting The Gender Binary

“Neptunic” refers to being attracted only to neutral non-binary, feminine non-binary, and female genders. Also known as nomascsexual, this sexual orientation is associated with those who are not attracted to male genders or masculine-aligned non-binary people.

The term “neptunic” can be used on its own, or it can be combined with other orientations. For example, someone may identify as a neptunic ciswoman or a neptunic enby (a.k.a. non-binary).

Neptunic is just one of the many different orientations used by non-binary people today. Here are other identities that may fall partially or fully under the non-binary umbrella:

What’s The Difference Between Neptunic And Lesbian?

Lesbianism refers to cis and trans women who are attracted to other women. Neptunic, however, is an identity primarily used by non-binary people to describe their attraction to feminine or neutral non-binary people, as well as those who identify as female.

Many non-binary people prefer to use neptunic instead to avoid having their gender assumed by others. There are also others who are still uncertain about their gender identity and use this term to simply convey their sexual identity. However, anyone who identifies with this sexual orientation should feel free to use the term “neptunic”.

Where Did The Term “Neptunic” Come From?

The term “neptunic” was first coined on the social media platform Tumblr by user socialjusticeichigo on August 31, 2017. “Neptunic” was intended to be a shortened version of the term “nomascsexual”. They emphasized that this term was not exclusive to non-binary people and could be used by anyone who felt that this term describes their attraction.

How Do You Know If You’re Neptunic?

This occasional attraction’s extent depends entirely on the person. For example, it may ebb and flow over time but never completely goes away.

What Pronouns Do Neptunic People Use?

Many people who identify as neptunic may identify as transgender, cisgender, or non-binary. This means that neptunic people may use gendered or non-gendered pronouns to refer to themselves. Commonly used gendered pronouns are he/him and she/her, but some neptunics may prefer to use the gender-neutral they/them.

However, there are other new gender-neutral pronouns gaining popularity, such as ey/em, xe/xem, and ze/zir. Make it a point to give out your own preferred pronouns and ask people what pronouns they use. This is a sign of respect and helps you avoid misgendering.

What Is The Neptunic Flag?

There are several versions of the neptunic flag. The most common version is made with six stripes in shades of blue and lilac. This color scheme was devised by Tumblr user socialjusticeichigo shortly after they coined the term “neptunic”. However, no meanings have been associated with the various shades.

The flag was first created on September 17, 2017. A second version featuring a simplified photo of the planet Neptune was devised by a wiki FANDOM user named Elderflowerjuice on June 20, 2021.

A third alternate version was recently created by Twitter user strwbryfemme. This simplified flag features four stripes in shades of blue and has a higher degree of contrast. A fourth version uses shades of pink and yellow instead to represent attraction to non-masculine non-binary people and women.

Is There A Neptunic Pride Day?

Sadly, an official Neptunic Pride Day has yet to be designated. However, neptunics and all other members of the LGBT community are always welcome to celebrate Pride Month.

If you identify as neptunic, feel free to do something special this month. It’s a great time to spread more awareness about neptunic sexuality, improve visibility, and cultivate an appreciation for the community as it grows.

There’s a lack of information or (or, rather, an abundance of misinformation) about different gender identities, including the neptunic identity. If you’re still figuring out what this term or other terms for gender and sexuality mean, this is your sign to read up and ask questions to learn more! Educating yourself is a great first step in creating a more inclusive and welcoming world that validates everyone’s identity.