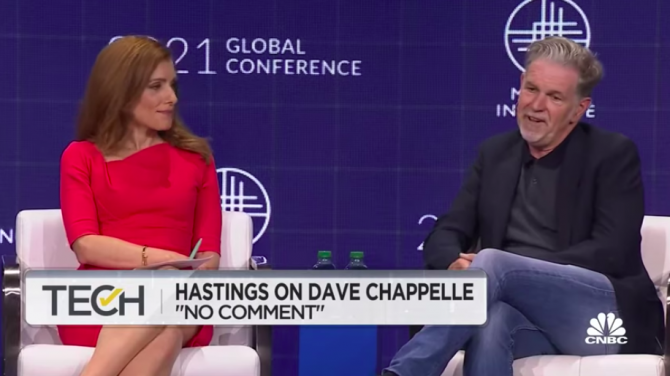 Netflix co-CEO Reed Hastings really, really, really does NOT want to talk about that whole Dave Chappelle transphobic comedy special thing that’s been dominating entertainment headlines for the past week and a half.

Appearing on a panel at the Milken Institute Global Summit last night, Hastings said he would only discuss his philanthropic efforts and nothing else.

“All philanthropy today,” he told moderator and CNBC correspondent Julia Boorstin after she pressed him about the “elephant in the room.”

Despite Boorstin’s repeated attempts to get him to, at the very least, address what’s been going on, Hastings refused, saying, “It’s a no comment. We are really focused today on what we can do for kids around the country.”

His remarks, or lack thereof, come as the streaming giant faces continued fallout from Chappelle’s show, which has been criticized by GLAAD, the National Black Justice Coalition, and several other civil rights groups for its hateful transphobic content.

Last week, Netflix’s other co-CEO, Ted Sarandos, received heat over a memo he wrote saying that the company has “a strong belief that content on screen doesn’t directly translate to real-world harm.”

Except that 2020 was the most violent year on record for attacks on trans and gender non-conforming people, according to the HRC, with majority of  victims being Black and Latinx trans women. So, Chappelle’s incessant jabs at them in his comedy specials do, in fact, cause “real-world harm.”

The company’s PR nightmare was only made worse the next day when three employees, one of whom is trans, were suspended for trying to crash a leadership meeting. Another employee was then fired for allegedly leaking information to Bloomberg.

Now, an employee walkout is scheduled to take place tomorrow outside the company’s  headquarters in Hollywood, where they will present a list of demands to leadership. Several LGBTQ celebrities, including Angelica Ross, Jameela Jamil, Colton Haynes, and Jonathan Van Ness, are expected to attend.

“When I’m in philanthropy, I don’t talk about Netflix, or try and promote Netflix, or answer questions on Netflix,” Hastings scolded Boorstin yesterday, adding that he’s “very disciplined about keeping those worlds separate.”

Picking and choosing what he wants to talk about while others are left to deal with the consequences. What a privilege!