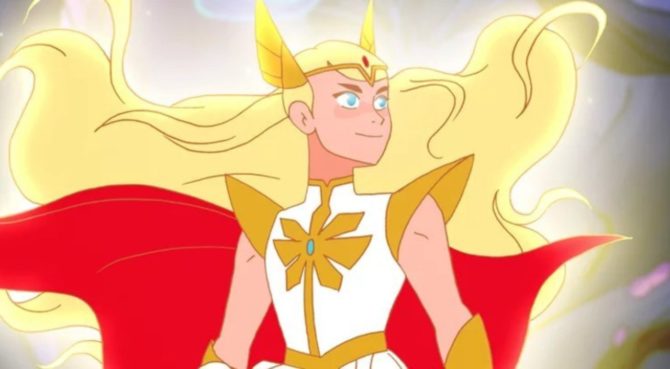 Stunning news out of the New York Comic-Con: the much-anticipated Netflix reboot of She-Ra will feature out-gay characters.

Scribner, who voices Bow, then jumped in to elaborate. “This is difficult because it’s a bit of a spoiler, but at the same time I feel like She-Ra really doesn’t shy away from reflecting what’s actually going on in the world around us. It’s not some topical thing that really needs to be discussed, it just is. Bow has two dads. I feel like it just reflects a lot of modern families and things that are going on in the world around us.”

Fukuhara, who provides the voice of Glimmer, also hinted that Bow’s dads will play a pivotal role in the first season.

The news should come as a welcome development for fans of She-Ra who have long recognized the title character as something of a gay icon. The original series debuted in the 80s as spin-off of the popular He-Man and the Masters of the Universe. He-Man also maintains a large gay following, in part thanks to a roster of scantily-clad, muscled male characters.

In the original story, an evil army kidnaps Princess Adora of Eternia and hides her on a distant planet. When her twin brother Prince Adam discovers a magical sword and becomes his alter-ego He-Man, he must journey across the universe to find Adora and help her realize her destiny as She-Ra. The new series will follow the original story, though Netflix has not yet announced when or if He-Man will actually appear. The show will debut on Netflix on November 16.