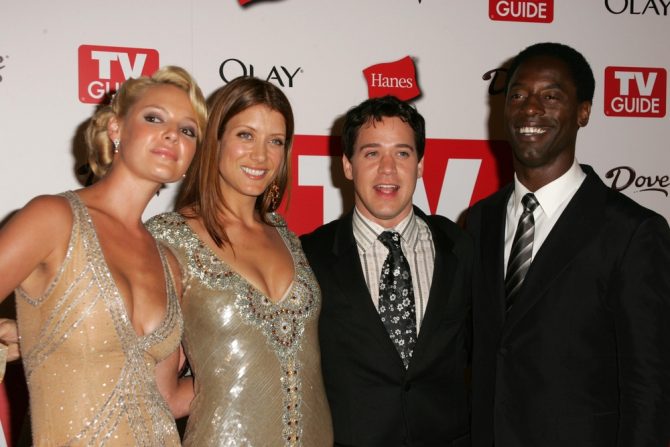 A book about ABC’s hit series Grey’s Anatomy is about to his shelves just as the show enters its 18th season and it’s trying to put an artful new spin on some old (very old) backstage drama.

In How to Save a Life: The Inside Story of Grey’s Anatomy, author Lynette Rice revisits the controversial firing of actor Isaiah Washington after he used an antigay slur against co-star T. R. Knight in 2006, resulting in Knight being outed in the press, and then repeated the slur again at the 2007 Golden Globes.

Afterwards, Washington apologized and even recorded a PSA with GLAAD, which aired during a Grey’s Anatomy re-run. Some people accepted his apology. Others did not. And eventually life moved on, though Washington’s career never recovered.

Now, 14 years and two endorsements of Donald Trump later, the 58-year-old tells Rice he did everything that was asked of him but it still wasn’t enough.

“I did everything that the producers and the network asked me to do,” he says. “I came back under great stress, and thought I was doing the job I was hired to do. I thought that was going to speak for my future at Grey’s, but apparently that wasn’t the same vision that the network and studio had for me.”

“I can apologize only so many times,” he says. “I can accept only so much responsibility. I just hope people in the industry can understand that it’s a horrible misunderstanding, what transpired with our show, and it was blown out of proportion.”

Last year, Washington made similar remarks when he attacked former Grey’s Anatomy co-star Katherine Heigl on Twitter for speaking out against him during the scandal.

“This woman once proclaimed that I should ‘never’ be allowed to speak publicly again,” he wrote. “The world agreed with her proclamation back then and protested for my job and my head in 65 languages. I wish I was on Twitter in 2007, because I will NEVER stop exercising my free speech.”

This woman once proclaimed that I should ‘never’ be allowed to speak publicly again. The world agreed with her proclamation back then and protested for my job and my head in 65 languages. I wish I was on Twitter in 2007, because I will NEVER stop exercising my free speech. pic.twitter.com/fQ6L1zfQRR

Another source tells Rice that, looking back on the incident, they believe the response to Washington’s remarks had more do with his “intimidating nature” than any animus against LGBTQ people.

“I think it had less to do with homophobia and more to do with his own intimidating nature,” the person says. “It was more about his personality than it was about any homophobia or perceived homophobia.”

Except, of course, that he used a homophobic slur against a gay man. But other than that, sure, no perceived homophobia.

“Isaiah was always the first to tell you that he played a gay guy in a Spike Lee movie,” they continue. “He certainly could be a butthead and aggressive, but I don’t think the guy was homophobic, truly.”

And an unnamed studio exec adds, “He had his personality issues. I’m not hiding that he’s been in unnecessary fights. The gay community never forgave him. But he paid an unnecessarily large penalty for this.”

Today, Washington is an outspoken Trump supporter with a cooking show on Fox Nation.