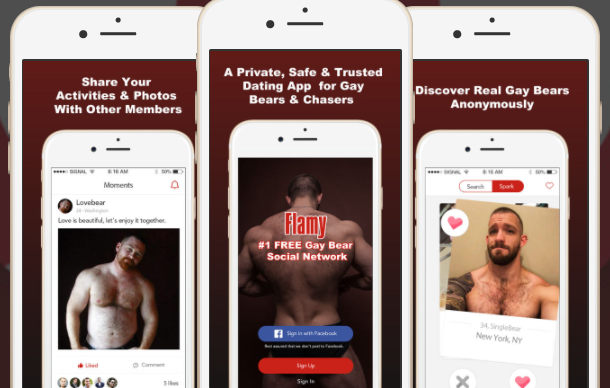 Introducing Flamy. A new hookup app for “bears and chasers” that aims to defy all labels.

“Whether you are a Twink, a Jock type or a Bear, with FLAMY you can be yourself,” the app promises. “We offer an open platform and live by the motto ‘NO LABELS’.”

“Gay people are some of the most discriminatory people on the planet,” CEO Casper X says in a press release, “and it’s no secret that dating in the gay world is hard if you don’t have a perfect body or a certain look.”

The allegedly non-discriminatory 18+ app is for males only. (Sorry, ladies… and non-binaries… and queers… and anyone who is not cisgender.)

Related: Shocking PSA shows just what it’s like to be on Grindr if you have HIV

Despite having only launched a few days ago, Flamy already claims to be the “#1 gay dating app for bears and bear chasers.”

Creators say they have tried to take “the best elements of Grindr, Scruff and other gay dating apps while leaving the discrimination and the labels those apps tend to generate.”

“We started the Flamy dating app to get rid of the barriers that some people face in our community,” Casper X says. “We’re not Grindr; we’re not Jackd. We love all of our gay brothers.”