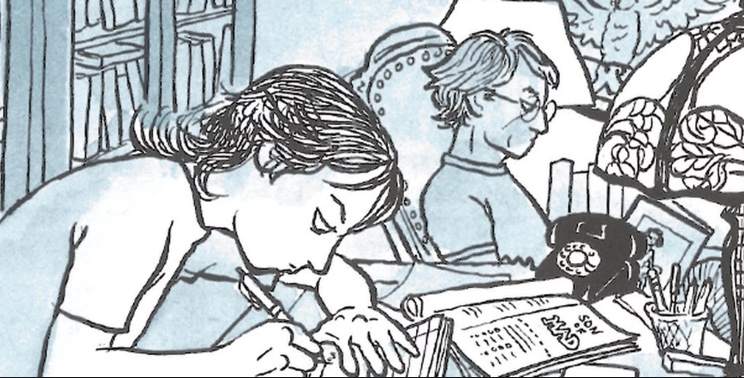 Fun Home, Alison Bechdel’s 2006 graphic memoir about growing up in a funeral home alongside her closeted father, was recently yanked from the shelves of a New Jersey high school library even though the school didn’t follow the proper protocol for doing so, reports the Comic Book Legal Defense Fund (CBLDF), a free-speech group for comics.

The award-winning graphic novel is part of the school’s 12th grade curriculum. But last summer, two parents at another New Jersey high school sought to have the book removed due to its “sexually explicit nature.”

The CBLDF notes, “The book was removed without a written complaint, committee meetings, or adhering to curriculum guidelines.” Previous to now, had been available in the library for over a decade.

Parents and students offended by the book can take advantage of an “opt-out” policy allowing students to be assigned an alternate book. However, two parents have said “the policy isn’t sufficient, and they don’t want children singled out for not participating.”

The CBLDF adds, “Their sensitivity to the isolation children might experience reading a different text in class is tone-deaf to the isolation students who can’t find themselves represented in the current curriculum feel.”

This is hardly the first time people have tried to remove Fun Home from a public school. The book’s presence has also been challenged in Utah, North Carolina, South Carolina and California.

In 2013, Fun Home was adapted into an award-winning Broadway musical. The book’s author is a recipient of the MacArthur Genius Grant and is the author of the acclaimed comic Dykes to Watch Out For. She’s also the namesake of the Bechdel Test, a feminist measure of films featuring women who talk to each other about something other than men.