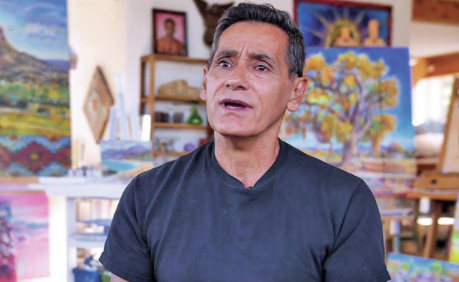 Roger Montoya, a Northern New Mexico Democrat running for the state House of Representatives, has publicly addressed his gay adult film past after a conservative news organization attacked him for it.

Montoya confirmed that he appeared in the scenes as a struggling college student nearly forty years ago.

In a statement posted to his campaign’s Facebook page, he wrote:

Thirty-eight years ago, as a 22-year-old struggling college student, I was a modern dancer and performer living in Los Angeles. I worked hard to earn my own way, never relying on anyone else, including my parents. I was auditioning for commercials and doing my best to succeed. Among those choices were two adult films I acted in as an adult, with other adults, in a very different environment and time. I am not proud of that choice, as I was young and naïve, but those experiences helped me to understand the exploitation young people face. Those experiences do not reflect who I am, and they are insignificant in the scope of my life’s work, yet they helped inspire my dedication to my community and the work I do to make sure that youth have opportunities, support and confidence.

He continued by reminding voters of the work he’s done since:

Over the past three decades, I have brought people together from all walks of life to tackle some of our state’s most pressing issues. I’m proud of helping people in rural New Mexico deal with life-threatening illnesses during the AIDS and COVID pandemics. I am proud of bringing arts to the schools in a new and creative way that included an entire community. I am proud of the non-profits I’ve founded and the work they are doing today to inspire our community, to provide food and shelter to our homeless, to feed and nourish, and address chronic substance abuse. I am proud to have worked alongside so many in this community to bring change for the better, and nothing will change that.

And aimed to focus on the work left to do:

If the Republican Party chooses to focus on something I did nearly four decades ago rather than how hard I will work to bring back our devastated economy, provide healthcare, create new jobs and industries, to improve our public schools, to fix our crumbling infrastructure, and to protect our land, acequias and our way of life, that is their choice. I trust the voters to make a better choice because we have so much at stake this November.

As the Santa Fe New Mexican notes, Montoya has long been a force for good in his community.

Among other accomplishments, Montoya helped start the first HIV education programs in his district’s schools. Montoya himself is HIV-positive, and has been open about the fact that he contracted the virus in 1986.

His opponent, Republican Justin Salazar-Torrez, had this to say about Montoya’s acknowledgment:

“We’re here to offer any support [to the Montoya campaign] that we can, whatever that may be. We live in a society that tends to bully, that tends to nitpick at everybody, and that’s not what we’re about.”

Torrez would do well to deliver that message to his own party, however, which called on Montoya to drop out of the race late Monday.

“This irresponsible and reckless behavior of starring in gay [adult] films, whether it takes place now or years ago, is unbecoming of any candidate or elected official,” party Chairman Steve Pearce said in a statement. “If you’re a public servant, you must be held to the highest standards.”

Montoya’s supporters offered messages of support to the candidate, celebrating his commitment to public service.

“Who people have sex with is none of our business,” one commenter wrote. “Keep representing the community.”

“These are challenging times,” Montoya concluded in his statement, “and I will be a truth-teller first and foremost, especially when it is relevant to the problems we are facing as a nation, a state and a community of Norteños.

Winning was never guaranteed, but I will continue to fight with respect and dignity for the very soul of this beautiful community.”