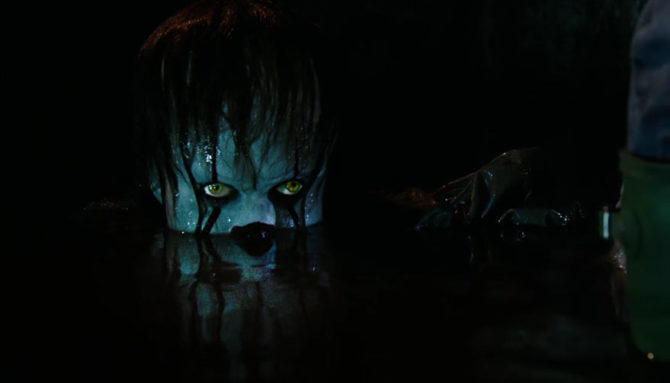 Oops, they did it again.

New Line Cinema’s new cinematic adaptation of Stephen King’s classic novel IT screams into theatres September 8, minus some noteworthy baggage that should have queer folk and horror fans raising an eyebrow or two.

For those that haven’t read the book or seen the fine ABC miniseries from the 1990s, IT tells the story of a demonic clown named Pennywise plaguing the small town of Derry, Maine. In the 1950s, after a series of child murders, a group of kids decide to take on Pennywise, who feeds on human fear. The kids seemingly defeat Pennywise, only to have the demon clown reappear 27 years later.

The new film version of IT focuses on the childhood portions of the novel (reset in the 1980s), possibly because of the popularity of the King-inspired Stranger Things (actor Finn Wolfhard, of Stranger Things fame, also plays a leading role here), and probably because Warner Bros. yearns to stretch the novel into franchise territory with a sequel focusing on the adult years. Jettisoning the adult segments gives the new movie the advantage of a longer runtime, allowing for a richer story. However, the movie also loses one of the most interesting elements of the novel: a queer subplot.

Related: Colton Haynes–Being an openly gay actor in Hollywood is so F*ed up

Readers familiar with Stephen King’s work no doubt recognize that queer themes reoccur throughout his bibliography, and fans of his cinematic adaptations will also note that the films almost always delete those themes in the adaptation process. The new IT proves no exception. In the novel, the kids doing battle with Pennywise also suffer bullying from a group of local teen boys, led by the sadistic Henry Bowers. Bowers, too, becomes an important figure in the adult years, assisting Pennywise in his reign of terror. The novel provides Henry with some fascinating origins for his cruelty. In addition to an abusive, bigoted father, Henry has a sexual encounter with one of his fellow bullies, a boy named Patrick. Filled with fear and shame, Henry’s self-loathing helps drive his torture of the local kids. Henry also blackmails Patrick into submission, threatening to share details of a sexual encounter with the town.

Now, the omission of the Henry-Patrick sexual relationship may seem like a minor deletion in a film full of big special effects and a creepy clown. But removing the detail from IT speaks to a larger issue. For all the supernatural elements of King’s novel, the underlying theme focused on the destructive natures of fear and violence. Pennywise feeds on fear, and to some extent, so does Henry. Unlike the kids who fight back against Pennywise though, Henry succumbs to his fear, eventually going insane and becoming a tool of destruction. The novel further underlined this idea by exploring themes of racism, anti-Semitism and sexism—all of which also conspicuously disappear from the new film version.

For all the popularity of Pennywise, the real horror in the novel IT came from Henry Bowers and his simple human frailties. Driven by fear to violence, Henry became the tragic villain of the story. The new movie continues the long tradition of diluting the richness and social commentary of King’s work, thus robbing it of its haunting, frightening power. Omitting the subplot concerning homophobia, and indeed, the larger points about prejudicial and fearful attitudes, softens the impact of the story, reducing it from an unnerving horror epic to a clown jumping out and yelling “boo.” That the omissions also speak to the larger fear of Hollywood itself in confronting real-life horrors throbs with profound irony.

Here’s hoping the inevitable IT sequel retains King’s commentary about homophobia and bigotry in general; the themes continue in the portions of the novel dealing with the adult years. Otherwise, the filmmakers will rob a story about the nature of fear of its real horror.

IT crawls into theatres September 8.