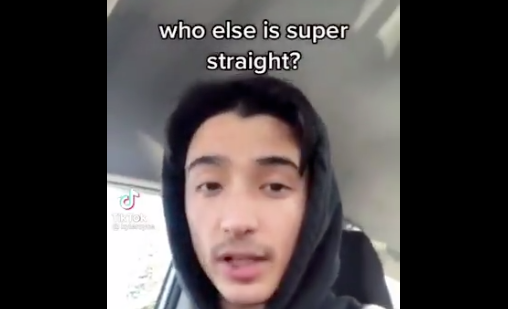 Remember that pathetic “Straight Pride” thing from a couple of years ago? We won’t fault you if you don’t, there’s not much to remember.

Imagine the same, fragile mentality and add an extra, heaping portion of transphobia and you’d be left #SuperStraight, a new, cringey trend to crop up on social media.

TikToker Kyle Royce reportedly coined the term in a video that has since been deleted from the platform. It’s since been posted to Twitter.

“Yo guys, I made a new sexuality,” he says, explaining that he’s “super straight” because he doesn’t date trans women as they’re “not real women.”

Anyone else super straight? Big respect to this guy createing a new thing. #superstraight pic.twitter.com/hdLdeV82xK

The video found an audience of likeminded men, and now #SuperStraight has over 14K posts — though one poster appears to have taken it upon themself to bombard the hashtag with trans pride flags. Nicely done.

Here are some of the other posts in the bunch:

And yes, they’ve created their own flag:

Royce even started asking his “Super Straight Community” for money, posting on his recently-removed GoFundMe:

After creating the original “Super Straight” video, I have received an insane amount of backlash and death threats. People found my family and have been set to ruin our lives; even attacking my mother’s business. Especially since I got COVID-19 currently and am homeless, stuck staying at my girlfriend’s house: some help and funding would be so greatly appreciated from the Super Straight Community.

He had only raised around $500 of his $100K goal before the fundraiser was deleted.