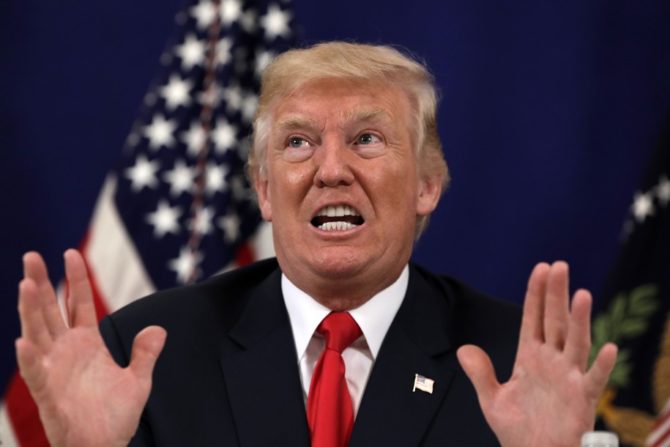 Shall we do this?

So, in 2018, adult-film star Stormy Daniels wrote in her tell-all book about Donald Trump that the ex-president’s penis was not dissimilar to “a toadstool.”

“I lay there, annoyed that I was getting f*cked by a guy with Yeti pubes and a d*ck like the mushroom character in Mario Kart,” Daniels confessed in Full Disclosure.

Now, according to Grisham, that truly hideous description of Trump’s genitalia upset him so deeply that he felt the need to call her from Air Force One and say that his penis was, in fact, not shaped a toadstool, nor was it small.

Related: Melania spent election night asleep in her bedroom not giving AF about anything, aide says

But this wasn’t the only time Trump allegedly made sexually inappropriate remarks to Grisham during the five years she worked for him.

In the book, she also claims that he asked her then-boyfriend, who also worked for him, to rate her performance in the bedroom. Oh, and another time he allegedly became so obsessed with a female press aide that he demanded she be brought onto Air Force One so he could “look at her [from behind].”

As if all that wasn’t disturbing enough, Grisham also writes about Trump’s ass. More specifically, his colon.

So, remember that weird, late night, unexplained trip to Walter Reed Medical Center he took in 2019? Turns out, he needed a colonoscopy. But he didn’t want to disclose this publicly because he was afraid of becoming “the butt of a joke” on late-night television.

Later in the book, Grisham also reveals that he had the procedure performed without any anesthesia because he didn’t want to temporarily assign power to Mike Pence because, well, he’s Donald Trump and his ego simply wouldn’t allow it.

“As with COVID, he was too wrapped up in his own ego and his own delusions about his invincibility,” Grisham writes.

Related: Is Ivanka secretly behind the new Melania tell-all book? Ex-adviser shares why she thinks so

Other details about Trump’s private life Grisham shares in the book is his personal care routine, which she says includes cutting his own hair with “a huge pair of scissors that could probably cut a ribbon at an opening of one of his properties,” as well as his deep-seated fear of germs and death. “Dead bodies, death, sickness—those things really seemed to creep him out,” she writes.

Grisham also writes about Trump’s “terrifying” temper, which she claims could only be calmed down by listening to showtunes, particularly “Memory” from Cats, which an aide was required to sing to him in the Oval Office.

In a statement, Trump’s latest spokesperson, Liz Harrington, called Grisham’s book  “another pitiful attempt to cash in on the President’s strength and sell lies about the Trump family.”