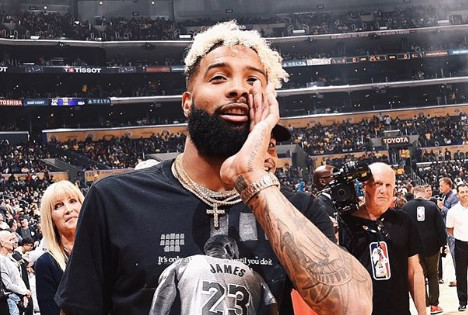 In a new interview with GQ, the New York Giants star claims the rumors started after an altercation with fellow player Jason Norman of the Carolina Panthers. The altercation culminated with Norman threatening Beckham with a baseball bat and shouting homophobic slurs at him. The incident landed Beckham in a one-game suspension and ignited all kinds of speculation about him on gossip sites.

Now Beckham has addressed the controversy and the anxiety that followed.  “I’ve never had an opportunity to talk about this,” Beckham explains. “Honestly wasn’t offended. I’ve never once had no problem with anybody who has their own personal life that they live. I have friends who are gay. It was almost more funny to me. I almost messed with them even more. It’s like when someone gives me an ultimatum, I’m usually always going to go to the opposite way of what you want me to go. So when they would say that, I would almost mess with them even more. I have no problem with anyone’s sexual orientation.”

When asked about homophobia within the black community, and how any deviation from a supposed norm or sign of affection between men can fuel rumors, Beckham also gave a candid response.

“Even like little videos where they see me leaned back or something, they’ll say that I’m looking at a guy’s ass,” he laments. “And I’m like, ‘Bro! You don’t even know where my mind is at.’ It was just a lose-lose. They’d see me with a white woman and be like, ‘Why don’t you be with any sisters?’ I have no problem with any race. Love is love. If you’re attracted to somebody, you’re attracted to somebody. There was such a stigma built up, [as though] I don’t like my own women. It’s like, no, I don’t like anybody who annoys me.”

Beckham may not play for our team, but we’re glad to have him on our side.

Subscribe to Queerty for a daily dose of #life #odellbeckhamjr. #sports stories and more