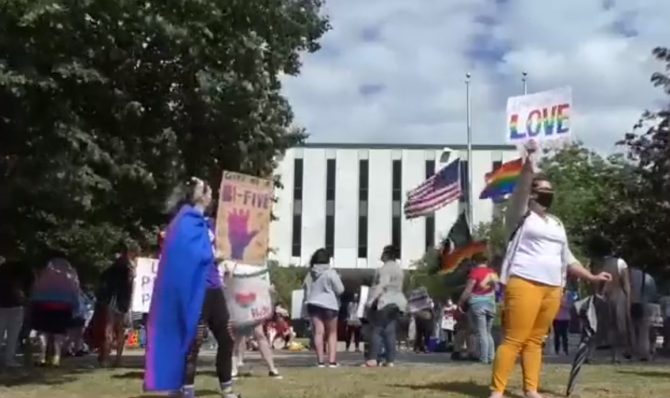 The queer community of Watertown, New York staged an impromptu celebration this week after police announced the arrest of a man in connection with removing the city’s Pride Flag.

The gathering began as a peaceful protest demonstration after the unidentified man took down the city’s Pride Flag and stuffed it in a nearby drop box. Word came down that police had arrested the man, inspiring the protest to morph into a celebration.

“Watertown won’t stand for this anymore,” organizer Seth Hill told WWNY TV. “Watertown is all-inclusive. It doesn’t matter if you’re part of the LGBTQ community or if you’re straight, Republican, Democrat — we are all here together to show we will not stand for hate and love will prevail.”

“I just want this to be a message to even the youth that are driving by in the back seats of the car to know that if you are part of the LGBTQIA community, you are accepted, you are loved, we are here for you,” said Reece. “There’s a community, we are strong, we are just as tight as a family and we take care of each other.”

City officials have announced the Pride Flag will continue to fly outside city hall for the remainder of pride month.