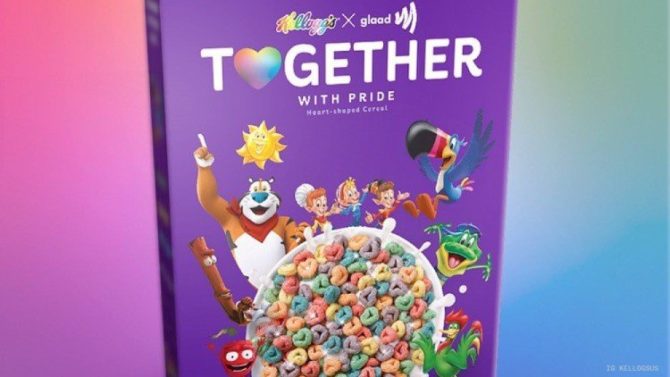 The right wing has found its next target: breakfast.

Stinchfield used the attack on cereal as a proxy to attack the queer community over the production of a special edition cereal by Kellogg’s called Together with Pride. The cereal–a mix of rainbow cereal bites and glitter, will hit stores in June as a commemoration of pride month. The Kellogg’s mascot characters, including Tony the Tiger and Toucan Sam, also pose on the front cover.

This pushed Stinchfield off the deep end.

“Kellogg’s Cereal has come out with a ‘woke’ cereal,” Stinchfield seethed. “The cereal is Rainbow hearts, covered in edible glitter. How nice. Give me a break. Here’s the worst part, the cereal slogan, ‘too amazing to put into a box,’ and then lists a space for kids to write in their own pronouns. Seriously. Whatever happened to box tops on cereal boxes? Now you have pronoun spaces?”

"I think General Mills has a gay leprechaun, right?…He wears high heels shoes, prances around in tights – leads me to believe, probably, that little Lucky Charm leprechaun might be gay" pic.twitter.com/THaBfIWtZ3

From there, Stinchfield proceeded to attack another longtime breakfast icon: Lucky the Leprechaun.

“Anyway, isn’t Kellogg’s a little late to this woke game by the way?” he went on. “General Mills has, I think General Mills has a gay leprechaun, right? Well, my producer Carly asked me, ‘is that leprechaun really gay?’ I said I don’t know, maybe: he wears high-heeled shoes, prances around in tights, leads me to believe, probably, that little Lucky Charm leprechaun might be gay.”

Related: Newsmax wants to know why the gays get a Captain America and Trump doesn’t

“But here’s the thing,” he continued. “For those of you that want to vilify me for those comments right, right there, aren’t you just as offended by the flamboyant rainbow hearts and glitter as a symbol of gayness? See, there are two standards here. Nothing like forcing our kids to be confused about their gender first thing in the morning with their breakfast.”

“Switch your kids to granola,” Stinchfield concluded. “It’s healthier anyway. You cut the sugar, okay, and then you don’t have to buy products from woke companies.”

While we’ll not comment on the sexuality of Lucky the Leprechaun–and we would be happy to have him on our team–and while we do confess that granola is quite healthy, we have to wonder why he’s singled the Lucky Charms stalwart out. Does he have something against the Irish?

Newsmax, of course, has a long history of pushing verifiably false news stories, including conspiracy theories around the 2020 Election and COVID-19 pandemic. Earlier this year, the outlet also railed against Marvel Comics for introducing a gay Captain America, but not one based on Donald Trump.

Forget sugary breakfast cereals: Newsmax is bad for your health.