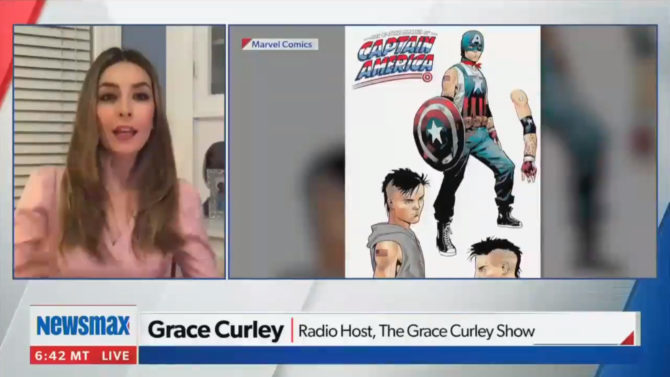 Just days after the announcement that Marvel Comics will add a gay Captain America to the Marvel canon in honor of Pride month, the Trump-loving political hacks of Newsmax now whine that Trump deserves his own super hero, too.

The remarks came on the Newsmax program Stinchfield, where host Grant Stinchfield launched into a rant about the intolerant left.

“This is my favorite most upsetting story of the day. The country’s going bananas,” Stinchfield whined. “He is a gay Captain America, complete with a nose ring, tats. When he takes off his skullcap there he’s got, like, a Mohawk thing. He’s not very muscular. What is this world come to?”

Stinchfield’s on-air guest for the evening, conservative radio host Grace Curley joined in the lament. “I’m all for inclusivity…But what I find amazing, what would really be pushing the boundaries, maybe if they had a conservative superhero or a Trump-supporting superhero? That would really require the left to be extra tolerant of other people that they disagree with.”

“I only wish I was a superhero. Wouldn’t that be fun?” Stinchfield said.

Newsmax host has a meltdown over gay Captain America: "The country's going bananas…He is a gay Captain America, complete with a nose ring, tats. When he takes off his skull cap there he's got, like, a Mohawk thing. He's not very muscular. What is this world come to?" pic.twitter.com/tw6mRyNWfx

Apparently, Mr. Stinchfield doesn’t have much knowledge of superheroes, or the life of torment they often lead. In the case of Captain America/Steve Rodgers, the character has far outlived all his friends, his girlfriend Peggy Carter, faced debilitating disease, fought a war against half of his allies, the Avengers, and faced down an evil version of himself from an alternate universe. In other words, being Captain America isn’t much fun.

Characters that preach the kind of hate, hysteria, ignorance and condone violence in the style of Donald Trump aren’t superheroes, they’re supervillains.

Though marketed as a news site, Newsmax has come under wide criticism for parroting conservative talking points rather than reporting facts. The outlet has come under scrutiny for spreading false information and conspiracy theories about Democratic politicians such as Hillary Clinton and Barack Obama as well as false information about voter fraud in the 2020 Election. Recently, Newsmax also came under fire for “reporting” dangerous misinformation about COVID-19, including that COVID vaccines are a “scam.”