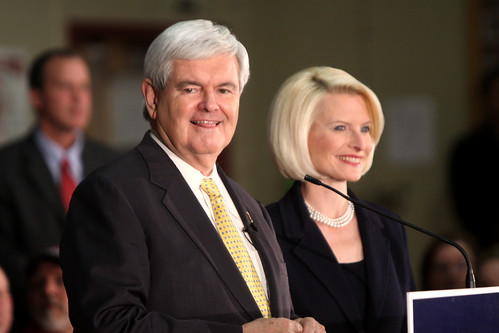 Who knew that Newt Gingrich was really a gay man? At least that’s what the latest revelations from his second (but not most recent) wife suggest. In an interview set to air on ABC tonight, Marianne Gingrich said that the former Speaker of the House wanted to have an “open marriage” so that he could have a wife and a mistress. How fun! According to Marianne, Newt at the time was having the affair with Callista Bisek, a Congressional aide 23 years his junior, “in my bedroom in our apartment in Washington.”

“He was asking to have an open marriage and I refused,” Marianne said. “That is not a marriage.” Marianne claims she was “shocked” at the suggestion, but let’s point out that Newt was having an affair with her while he was still married to wife number one. So her protestations ring a bit hollow. Newt went on to divorce Marianne and marry his FWB.

It’s hard to call Gingrich a hypocrite, because the word just isn’t strong enough to explain the duplicity of what he says compared to what he does. This is, after all, the man who was leading the impeachment charge against Bill Clinton for his tryst with Monica Lewinsky, a young aide, at the same time that he was fooling around with Callista, a young aide. But Gingrich has been such a vociferous supporter of traditional marriage, and it now it turns out he was looking for the type of arrangement that evangelicals believe marriage equality will make commonplace. Of course, the difference between the type of relationship that some gay men are pioneering and the type of relationship that Gingrich had is, well, honesty and a keen sense of mutuality. That was never a plentiful commodity for Newt in any case.

Gingrich has been on a surge in South Carolina among right-wingers who distrust Romney for being a cult-following flip-flopper. The latest news isn’t likely to do him much good. Ironically, Rick Perry withdrew from the race to endorse Gingrich today as “a conservative visionary.” Perry also noted that “Newt is not perfect, but who among us is?”

True, but few could be more imperfect than Newt.