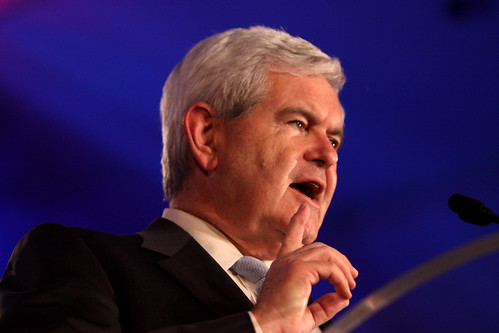 You have to say this for Republicans: when they get a message they stick to it. One of the themes emerging from the GOP presidential field (which is looking pretty drought-stricken) melds red-meat social conservative homophobia with recently discovered fiscal concerns. Yes, it’s time for “Blame Gay Marriage for the Economic Crisis.” We’ve already been linked to climate warming by Tim Pawlenty, so let’s up the ante.

The pioneer in this new convoluted logic was the master himself, former Speaker Newt Gingrich. In an interview with Catholic Radio of San Diego (appearing on an AM station, of course), Gingrich linked what his interviewer termed an “increasingly secular” society in which “the family is under attack” and the destruction of free enterprise.

“You have to recognize that free enterprise is based on free people and…free people are based on faith. The very source of our strength is that we believe these are truths—not theories, not ideologies, not gimmicks, not political consultants, powerpoints—truths, and so there’s a core absolute overlap between free enterprise, freedom and freedom of faith. And if you don’t have freedom of faith in the end you’re not going to have free enterprise because there’s no moral force that defends and protects you.”

And guess whose ideology is being referenced by the thrice-married Newt?

Just in case you weren’t entirely clear on that concept, Rick Santorum amplified it by suggesting the economy wasn’t destroyed by Bush-era tax cuts and overspending or anything to do with actual numbers. The cause was a lack of moral backbone illustrated by all of you marriage-seeking gay couples out to destroy the American family.

In a chat with two of our favorite homophobes—Tony Perkins of the Family Research Council and Tim Wildmon of the American Family Association—Santorum philosophized about the impact of “this whole redefinition of marriage debate” and other new-fangled ideas:

“If you think that we can be a society that kills our own, and that disregards the family and the important role it plays, and doesn’t teach moral values and the important role of faith in the public square, and then expect people to be good, decent and moral when they behave economically, if you look at the root cause of the economic problems that we’re dealing with on Wall Street and Main Street I might add, from 2008, they were huge moral failings.”

Personally, we think Santorum should be made to diagram that sentence as punishment for the thoughts behind it.