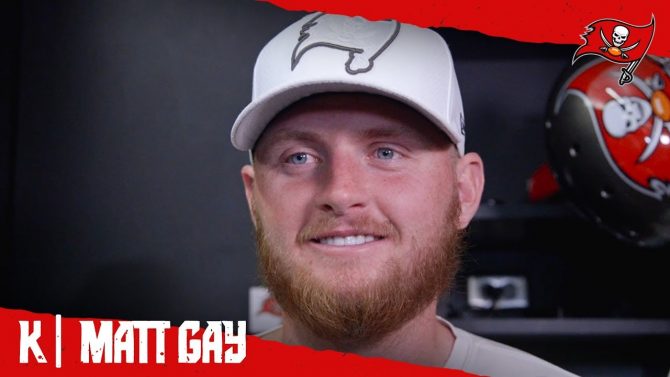 Tampa Bay Buccaneers kicker Matt Gay has been taunted and teased his entire life for his name and he’s finally decided enough is enough.

On Sunday’s game against the Indianapolis Colts, 25-year-old Gay, who, for the record, is not gay, wore special anti-bullying cleats to send a message of solidarity with LGBTQ people and others who have been subject to bullying.

“It’s so easy to hide behind a phone and say whatever you want,” he told the Tampa Bay Times prior to the game. “I think it’s pure coward-ism for those who do it and there’s no place for it in this world.”

“I got bullied and teased all the time for my last name and things like that. Luckily I was stronger willed than they were and overcome it. There’s a lot of kids that get bullied in this world and have no way to stand up for themselves.”

#Bucs K Matt Gay unveils his cleats for #MyCauseMyCleats in support of Anti-Bullying. Gay spoke on why he chose this cause. pic.twitter.com/J94kkvwOY2

“Some of the messages I receive, it’s almost like people forget you’re an actual human being,” Gay said. “That you’re sending this to another person. It’s easy when you’re sitting behind a phone and not face to face with someone and can say whatever you want.”

He continued: “But you don’t know it’s affecting that person, it’s affecting the mom and those that are around them. Just being able to show a little faith in humanity and love everyone. We’re all struggling through life. There’s no reason to beat somebody down for no reason.’”

Gay chose to wear the cleats as part of the NFL “My Cause, My Cleats campaign,” which has players decorate their shoes to show support for a cause they personally believe in.

The Buccaneers beat the Colts 38-35 during yesterday’s game.