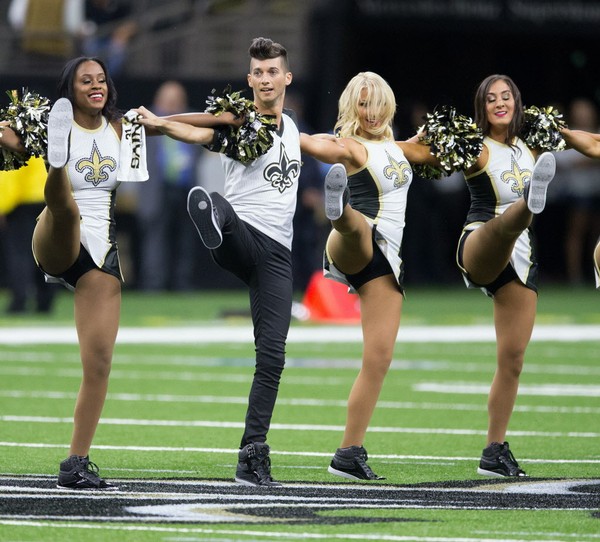 Dressed in a white Saints tshirt and skinny black jeans, 25-year-old Jesse Hernandez made history over the weekend when he hit the field for the New Orleans Saints Saintsations dance squad performance.

Hernandez is one of three male NFL cheerleaders joining the league this season along with Quinton Peron and Napoleon Jinnies, who will make their debuts with the L.A. Rams this season.

By the third quarter the booming Saints announcer had not called particular attention to the crucial change in the 2018 Saintsations. As Hernandez marched along the sideline passing close to the crowd with the rest of the dancers, fans seemed to cry out, but it was unclear if they cheered for Jesse particularly or for all the glittering black and gold cheerleaders. A new normal seemed to have immediately dawned.

Sadly, not everyone has been so supportive of the NFL’s new male cheerleaders. While there weren’t any problems at Friday’s game, a local media outlet ran a story about it online and was bombarded with homophobic comments.

Another added, in ALL CAPS: ‘THE NFL PUSHING THE P*SSYCRAT POLE SMOKING ETHICS.”

Other comments included: “Homo.” “Pantywaist.” “Sick libturd bullsh*t.” “What male football fan wants some queer prancing around with the women?” “I’m surprised he hasn’t set off the fire alarms in the Superdome.”

Watch Hernandez kill it on the field.