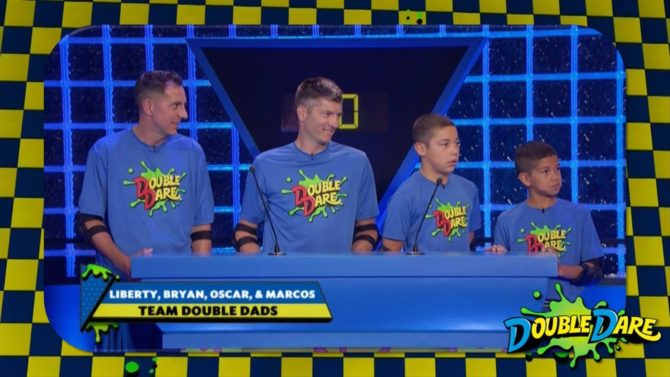 Call it a sign of the times: The popular Nickelodeon game show Double Dare just featured its first family team with two dads.

Double Dare first made a slimy splash back in 1986 when the show premiered on the newborn Nickelodeon cable channel and quickly became a pop culture institution. Viewers loved the mix of trivia and physical obstacles on the show which often saw contestants swimming through pools of bean dip or picking a giant nose looking for a flag.

Now, the latest revival of the series, hosted by Liza Koshy, featured it’s first team headed by a same-sex couple.

Dubbed “Team Double Dare Dads,” the group consisted of siblings Oscar and Marcos, as well as their dads Liberty and Bryan. Even better, the show celebrated the landmark.

The addition of a same-sex couple to Double Dare comes as the latest in a series of pro-LGBTQ moments broadcast by Nickelodeon. In addition to featuring out-queer stars like George Takei and RuPual on their shows, Nickelodeon also featured same-sex couples on its series The Legend of Korra and The Loud House.

Here’s hoping the Double Dare Dads had fun running in the One Ton Human Hamster Wheel.