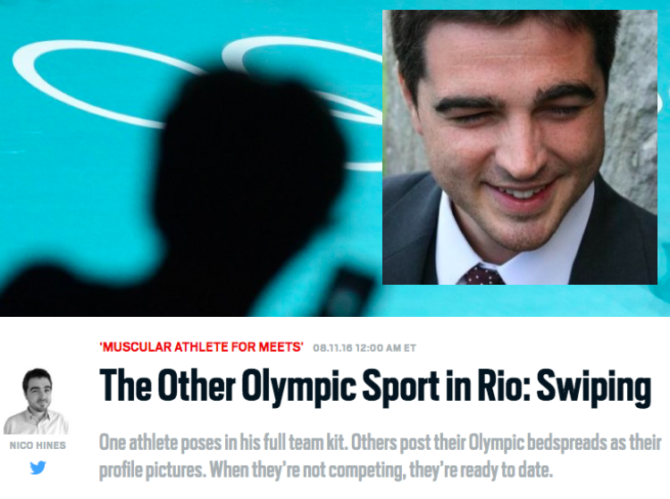 After seven long months, The Daily Beast reporter Nico Hines has finally come out of hiding.

In a post titled “What I’ve Learned” published Monday, Hines says he’s really, really, really sorry for that homophobic article he wrote last summer in which he outed closeted athletes at the summer Olympics in Rio by stalking them on Grindr.

“Seven months ago, The Daily Beast ran a story of mine that never should have been conceived, written, or published,” Nico’s apology begins. “For that, I am deeply sorry.”

Related: Everyone’s Pissed At This Straight Journalist Who Used Grindr To Out Gay Athletes In Rio

He goes on to say that “private individuals’ sex lives are only legitimate topics when they’re addressed with their consent or contribute to the public good” and that his article “intruded into the lives of people who had a right to be left alone.”

We’re glad he finally sees that. Although we’re not sure why it took him more than half a year to come to such an obvious realization, but whatever.

“The lens of privilege distorted my worldview,” he grovels. “Before writing this story, I didn’t appreciate what ‘check your privilege’ truly meant.”

He continues, “Since our article was published, I have received hundreds of emails reminding me that many members of the LGBTQ community do not always feel they can trust society at large and I am aware that I contributed to that fear.”

Nico wants everyone to know that he knows he was wrong and “I will not get it wrong again.”

The apology is followed by an Editor’s Note which states the Nico will be returning “full-time to his position as senior editor and London-based reporter with The Beast, following a lengthy period of intense reflection.”

But not everyone’s feeling the apology, or The Daily Beasts’ decision to hire him back:

If it takes you 7 months to apologize, you're probably still an asshole. Not sure what The Daily Beast is thinking: https://t.co/qa6fz5ryGP

If Nico Hines' apology is really that sincere it should not have come as part of the same announcement of him getting his job back.

Taking 7 months to apologise for homophobia doesn't smack of sincerity but of running out of cash @NicoHines @dailybeast https://t.co/JBda8f3Sar

.@NicoHines deeply apologized for his olympic grindr story, and i just want to say, deeply fuck that guy https://t.co/qFCz7CM5zu

What do you think? Do you accept Nico’s apology. Take our poll and let us know…