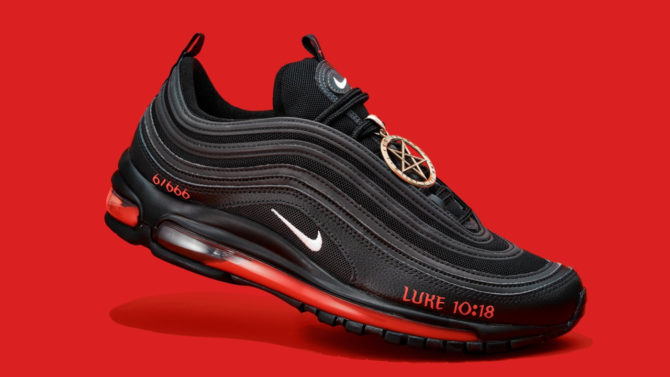 Hot off the success of his latest single “Montero (Call Me By Your Name)”, rapper Lil Nas X has further ruffled some religious feathers by releasing a limited edition pair of shoes containing a drop of blood. Shoe giant Nike issued a statement distancing itself from Nax X’s so-called “Satan shoes.”

The shoes are a modified pair of Nike Air Max 97s, redesigned by the streetwear company MSCHF. MSCHF is selling exactly 666 pairs as a promotion of “Montero,” which feature a pentagram and a Bible verse, Luke 10:18, about Satan’s fall from heaven. The shoes also contain a drop of blood drawn from employees of MSCHF to add to their mystique.

“We do not have a relationship with Little Nas X or MSCHF,” Nike said in a statement. “Nike did not design or release these shoes and we do not endorse them.”

Besides the adornment of the shoes themselves, the video for “Montero” also features its own set of religious references, as it depicts Lil Nas X sliding down a pole into Hell and giving Satan a lap dance. Apparently, in response to the controversy around the shoes, Lil Nax X also released an “apology” video on Sunday (March 28), in which he teased a mea-culpa for the shoes, only to have the video cut to footage of him giving a lap dance to Satan instead.

Nas X has been clapping back at his many critics, South Dakota Governor Kristi Noem among them, on Twitter:

ur a whole governor and u on here tweeting about some damn shoes. do ur job! https://t.co/qaor6W0B9C

you know you did something right when she talks about it https://t.co/9ujlFhBMdZ

In other words, he ain’t sorry folks.

Lil Nas X also released a statement on Friday in the form of a letter to his younger self, explaining some of the references in the video, and their connection to his own struggle with his sexuality.

At the time of this writing, the video for “Montero” has already racked up 32 million views. Meanwhile, MSCHF continues to sell its special edition Satan Shoes, which retail for $1,018. No doubt many a Lil Nas X fan will consider selling his soul for a pair.