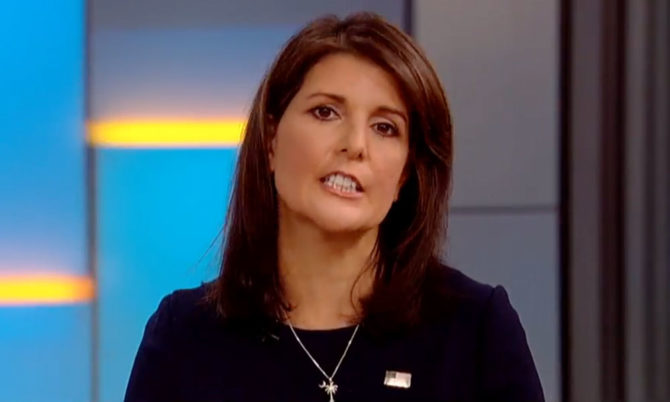 By now you’ve no doubt heard about Trump’s embarrassing episode at the United Nations yesterday.

While speaking before the UN General Assembly, Trump took a moment to brag about all the tremendous accomplishments his administration has overseen these past two years, saying they’ve done “more than almost any administration in the history of our country.”

"Today I stand before the United Nations General Assembly to share the extraordinary progress we’ve made. In less than two years, my administration has accomplished more than almost any administration in the history of our country,” Trump says as he begins his speech at #UNGA pic.twitter.com/hM6YH0h60k

Trump’s ego was bruised. So the White House has sent Nikki Haley, the US ambassador to the UN, out onto the media circuit to mop up his tears.

Haley appeared on Fox & Friends this morning to share her own personal reimagining of yesterday’s events.

Not only did she insist the laughter came from a place of love and respect for Trump, but she blamed the media for what she says was a total misrepresentation of what actually happened.

“The media was trying to make it something disrespectful,” Haley said. “That’s not what it was.”

Got that, folks? What you witnessed with your own eyes and ears was totally inaccurate. Take it from the lady working in the Trump Administration.

“The media has got this so wrong. I deal with these leaders every single day. I know exactly how they think. Do they love America? No. Do they respect America? Now they do. When they said that, they loved how honest he is. And it’s not diplomatic. And they find it funny. I mean, when he goes, and he is very truthful, they kind of were taken back by it.”

Except that Trump’s comment about accomplishing “more than almost any administration in the history of our country” wasn’t “very truthful.” It was actually kinda the opposite of that. Which is precisely why people laughed.

Haley added that afterwards, all the world leaders wanted to take pictures with Trump, congratulate him, shake his hand, and tell him just how great his speech was.

“They love to be with him,” Haley said, adding that when Trump gives a speech at the UN, “that’s the only time you’ll see that entire chamber standing room only.”

That’s when Brian Kilmeade jumped in to add, “It was an echo laugh! I think a part of it was he pulled off the prompter and reacted in realtime and that never happens at the U.N. You read your story, the world is watching, he ad-libbed it.”

“And that made them love him even more,” Haley beamed.

On @foxandfriends, @nikkihaley attacks media for…..[checks notes] …. Trump getting laughed at at UN.

"I saw the media was trying to make it something disrespectful. That's not what it was. They love to be with him. That's only time you'll see that chamber standing room only" pic.twitter.com/LrxZzbMY0R