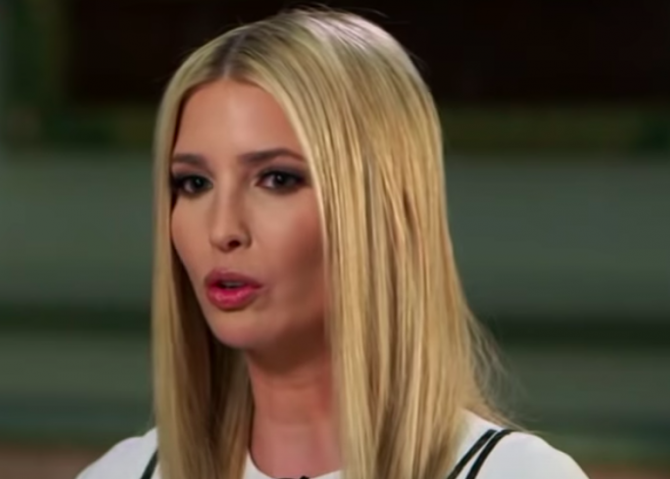 Ivanka Trump is reportedly putting her political ambitions on the back burner and “focusing on her family,” an “unnamed source” (read: Ivanka) tells Fox News.

The former first daughter, who had been rumored to be seriously considering either a Senate run or a bid for Florida governor, is apparently content eating bonbons in her $40,000/month Miami condo as she has illegal workers build her $32 million dream home on Indian Creek Island.

But a closer look at what’s been going on in Trumpland suggests that, as usual, there’s more to the story. Because Ivanka’s sister-in-law is also hitting the brakes on a career in politics.

Lara Trump just announced that she will not be running for Senate in North Carolina in 2022 after multiple trips to the state and months of speculation.

“I am saying no for now, not no forever,” she told a crowd at the North Carolina GOP state convention on Saturday.

Like Ivanka, Lara, who many had considered to be a shoo-in for her party’s nomination, said she wants to focus on her family, adding that “at the right time” she would “absolutely love” to be a congresswoman.

But journalist Jeremy Hobson suspects the real reason neither are running for office after publicly flirting with the idea for so long is because internal polling found their chances of actually winning were slim to none.

“The fact that both Ivanka Trump and Lara Trump have decided NOT to run for office right now should tell us something about internal polling on the strength of the Trump brand,” he tweeted.

The fact that both Ivanka Trump and Lara Trump have decided NOT to run for office right now should tell us something about internal polling on the strength of the Trump brand.

In April, an NBC News poll found that 44% of Republicans supported Donald Trump, down from 50% just a few months earlier. And just last week, the ex-president shut down his official blog after less than a month because of what the Washington Post called “measly readership.”

We’re guessing the multiple ongoing investigations into the Trump Organization are also maybe probably playing a major factor in both Ivanka and Lara’s decisions to avoid the political spotlight.

On Monday, Rolling Stone reported that investigators are “closing in” on Ivanka and her involvement in massively overcharging for rental at the Trump International Hotel for her dad’s inauguration.

and maybe something about what the SDNY case is uncovering…. this whole family is so deep in it

Their incoming indictments are higher than the polling numbers. Duh.

Condos in Trump buildings are hemorrhaging cash, His golf courses are struggling, he is almost certain to lose some of his properties and he will never be able to pay debt coming due. Oh…and the whole family is being investigated for fraud. Maybe a bad time to run.

I just assumed they were too broke, what with Junior selling Cameos for drug money.

I think it is a sign of their mounting legal troubles.

Yes, strength of the Trump brand is MUCH weaker than one would believe from the amount of air time he is getting – and remember it was 24/7 coverage in 2015 that got him elected in the first place. @MSNBC @CNN & other networks were complicit then – they will be more so next time

His condos are selling at super low prices. Save a $million now!

My guess is neither want to put forth any kind of effort that would be required if they won.

Neither would pass the first day of vetting. They don’t just have skeletons in their closet the have a warehouse of bones.