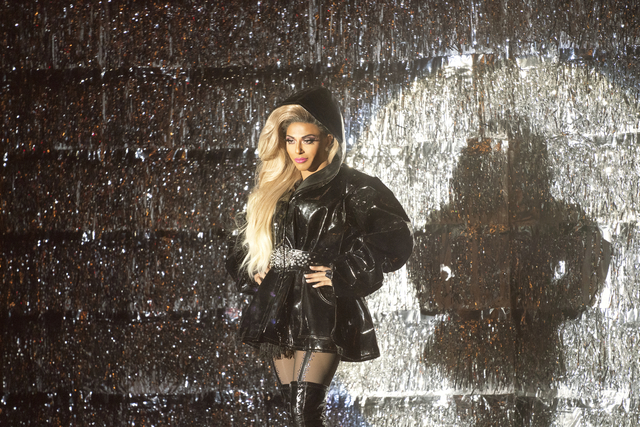 Just ask Shangela, the Texas-born drag performer, who first hit the big time in Season 3 of RuPaul’s Drag Race. She would also appear in Season 3 of Drag Race All-Stars. Her success on the show would also lead to appearances on Glee, The X-Files and 2 Broke Girls, as well as in the film Hurricane Bianca. Along the way, she also picked up the prestigious Innovator Award at the 2021 Queerties, and took home the Queerty trophy for Drag Royalty in 2019.

In 2020, Shangela parlayed her success as a drag performer into a show of her own alongside fellow Drag Race alumni Bob the Drag Queen and Eureka O’Hara. We’re Here follows the three queens as they travel across the country visiting small towns (often rolling up in a pink glittering RV) with the hope of raising the visibility of the local queer community, and helping to combat homophobia with the population at large. Season 2 of the series, which arrives on HBO Max October 11, sees the cast visiting the towns of Del Rio, Texas, Selma, Alabama, and Temecula, California, among others.

We snagged time with the ever-busy Shangela to talk about the new season of the show, her showbiz career, and the unexpected power of drag performances just ahead of the We’re Here Season 2 premiere. The show arrives on HBO Max October 11.

So the show survived COVID. How are you feeling right now?

I’m so excited for the show to premiere. Last season we were able to film six episodes. This season grew to eight. So I’m thrilled for people to see it. We’re done filming now. I just know how inspiring these stories are. I can’t wait.

I particularly want to talk about Episode 4, because I feel like it’s the best episode of the series so far. You visit Selma, Alabama. Your drag child is Joseph, a semi-closeted real estate agent. Did you have any idea what you’d be getting yourself into? Did you know his backstory?

You know, before we go into any episode, once we’re assigned who we will be working with, we get kind of a minute and a half overview. It’s a video they record saying “Hi, I’m Joseph, this is my story.” So I knew snippets. I didn’t know how deep the story would be, or his volatile history. I didn’t know any of that. 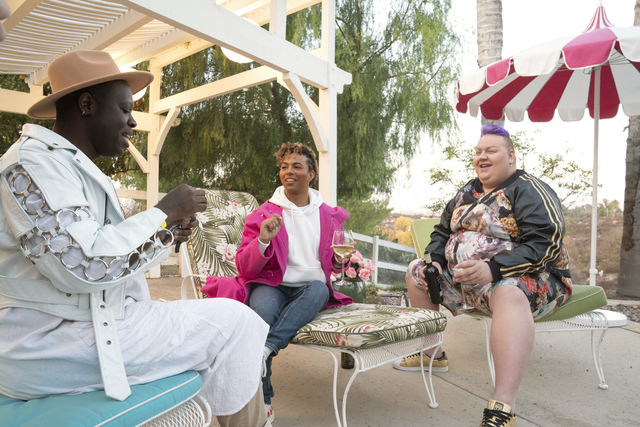 The great thing about this season, and about Joseph’s story—he trusted me enough to share so many truths with me no matter how difficult they were to go back to. He built a real connection and relationship with me. It made me have a greater affection for him and his story, and made me understand how important it is to be able to love yourself, to own all the parts of who you are and to share them in the light.

You’ve already alluded to this. I don’t want to give everything away, but Joseph talks about being abused by an ex. What goes through your mind when he tells you something like that?

Well when we’re building a relationship with our drag kids, for me, I want them always to feel safe with me. Joseph felt safe enough to casually share that story. I was shocked—you see it on my face. But I also want to respect how open he was with me in that moment. I took it in. I felt like in that moment Joseph was looking for someone to hear him out, to create a safe space. And I don’t think, in that particular moment, he’d dealt with how emotionally layered that situation was. I think he was just like I’ve moved on. Sometimes in life though, we can’t just walk away from situations. We have to walk through them.

Great answer. And you can see when he hits the stage how much emotion is coming out. I gotta say too, meeting with the survivors of Bloody Sunday got to me, big time. What Bob says about survivors’ guilt is very powerful. For those of us that survived AIDS or hate crimes, it strikes a similar chord. What did you find yourself questioning in that meeting?

That’s a very heavy scene. It was a heavy experience. We get to this conversation with the survivors who lived through Bloody Sunday on the bridge. On one level we came to it as an education—listening and learning about the experience. I didn’t expect to be so moved. All of us—Bob, Eureka & I—express our emotions in different ways. Seeing Bob have this emotional experience so vividly in talking about survivor’s remorse, it moved me. That’s my sister. You don’t ever want to see your sister in pain or struggling. You want to hear them out and show love.

Related: Watch Shangela teach Kamala Harris how to clack a fan at a gay bar

Hearing that, for me, hearing those ladies that shared their stories with us, it made me feel gratitude. We all felt different things: Bob felt survivor’s remorse. I felt gratitude. To be in a space today in that moment, hearing those stories, and not just that, but feeling a sense of purpose—not only because I’m a black person, not only because I’m from the south. I’m also queer black person. Knowing that so many of us have also gone through so many hard things, and didn’t live to share their stories. Being privy to that, it’s important to carry the responsibility. It’s like they said to Bob: “Don’t feel remorseful because you live in this moment. We get excited that you have freedom some of us never did. Now, what are you going to do with them?” That’s what I felt—a greater sense of purpose. We’re on a show called We’re Here that goes into homes all over the world. We’re able to amplify voices. These women, people like Joseph—in all the cities we’ve gone to, we’re able to connect with them and show greater visibility and also share their stories. Hopefully, someone will see it and feel empowered to have hope and go on. That’s what this show is about—inspiring hope. 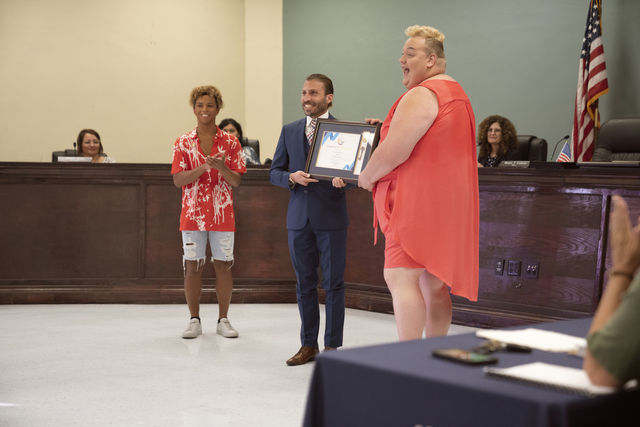 We aren’t the first generation in this world to face challenges. If these ladies can get up off that bridge and keep moving, and share that story, difficult as it is, we should also have that strength.

Beautiful. You also visit Texas in Episode 3, which is very personal for you. Do you find a certain catharsis in doing the show? Are you able to let go of pain you have in your own past?

The Del Rio episode is special to me because I am from Texas. That’s where I was for most of the pandemic, in a house I purchased for my grandma in Paris, Texas. It’s so interesting having a show on TV about amplifying voices when I’m back in my small, conservative town watching. Del Rio struck a nerve for me. Not only did I identify with growing up in a small, Texas town being gay, but also Del Rio is like this melting pot of cultures: Tejano, Mexican, languages. Here we are in this space where they don’t even say the word “gay.” They just say “like that.”

It shows their level of comfort with even discussing queer issues and language. In this, I was so excited to see someone like Bruno, the mayor of Del Rio, a leader who represents something. A lot of people in the community have stereotypes about LGBTQ people, especially in the drag space. In seeing him in a leadership role, an elected official elected by people who may not even agree with his way of life—his opposition ran pictures of him in heels and a tutu at Pride.

That’s what a lot of conservatives try to do to make us feel less-than. And Bruno didn’t let that make him feel less than. He pushed forward and overcame. And now he has to run a town for people who love and support him, and also those who don’t. That’s what this show is about—bridging gaps between people.

In Del Rio, we weren’t even sure anyone would come out. So to see the community of support come together in a space that was very unlikely—it was very beautiful. I can’t wait for people to see that episode. I think people will find a connection. Seeing Bruno, the mayor, doing drag, smashed a stereotype. People often think you have to be one or the other. Bruno proves you can be a drag queen on Wednesday night and the mayor on Thursday morning. 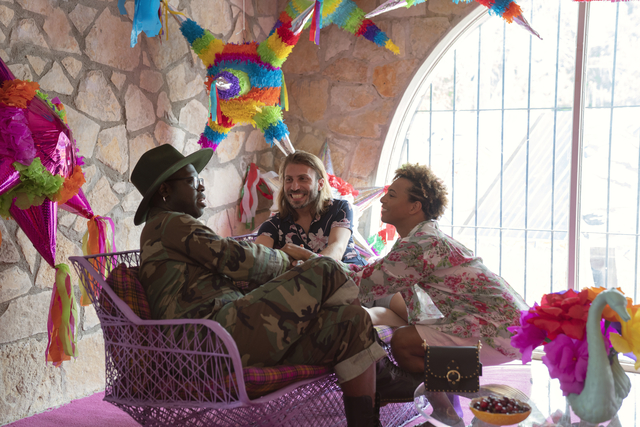 That speaks to something else that surprised me. The power of drag is something I never really thought about until I saw this show. Does it still amaze you like that?

Yes, it does. I always believe in people and their abilities. It’s one thing to share a story, but we also produce a drag show every episode. A lot of people, even in the queer community think that’s easy. Put the wig on, the makeup, the dress, do the show. For me, if you’ve been a drag performer, you understand every time I step out on the stage, it’s not just for entertainment. It’s a moment. It’s an opportunity. You can only create the best moment when you feel fearless.

So I, in a small about of time, have to take people who think share my truth, wig, dress, got it. And I have to be like no baby, this is bigger than just you. When you tell them that, sometimes you see the fear of God in their eyes. But one thing I stick to: I honor my opportunity on the stage. You don’t dial it in: you give 110%. You don’t have to do a death drop, you have to walk out on that stage knowing the words, the choreography, and will walk on that stage prepared. In that moment, you have an opportunity for people who have never seen drag before. You have the opportunity to be the touchpoint, and to show that your mamma Shangela prepared you for the moment.

Last question then. How do I get to go joyriding with you in your pink spangled RV?

I mean we might as well be making Priscilla, Queen of the Desert Volume 8…9…12. Who knows. If you jump on there with a big piece of fabric going…

You’re welcome to come get a ride any time honey. I can’t guarantee the RV always has gas, because it goes places. I’m so excited to have that. We roll into town with that a lot of times. It’s just really cool. When people see those buses, we turn heads.

I’ll gladly chip in for gas.

Don’t be surprised when I roll up to your house!