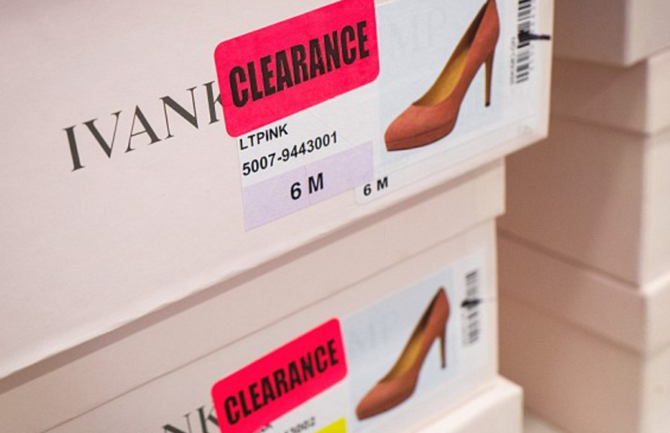 If Ivanka Trump was hoping her status as First Daughter would help elevate her fashion line, she can think again. Department stores and discount retailers alike are dumping her products faster than poor factory workers in third world countries can make them.

Burlington is the latest company to #DumpIvanka. Without any warning, the company just pulled all 13 of the Ivanka Trump-branded items from its website. It offered no explanation nor has it responded to media requests for a comment.

The dump came just days after several other retailers also dropped Ivanka’s line, including Nordstrom, Neiman Marcus, Gilt, ShopStyle, and the Home Shopping Network. Meanwhile, TJMaxx and Marshalls instructed employees last week to trash all Ivanka Trump signage and mix merchandise into the racks. And Sears and Kmart have said they will be removing over 30 Trump-branded home products from its websites. Many retailers still carrying the first daughter’s products have discounted the line significantly–as much as 50, 60, and even 70%.

All this comes on the heels of a new study by market research firm Slice Intelligence that found online sales for the first daughter’s line dropped 26% in January 2017 alone, preceded by a steady decline in the last quarter of 2016.

Oh, and to add insult to injury, this picture began circulating on social media last week:

The Ivanka memes have not been kind either:

#FakeBreakingNews- so no news or action on North Korea, but Donald J. Trump is hard at work finding new retailers for #Ivanka’s crap.

Rosemary Young, Ivanka Trump’s senior director of marketing, insists the company is not the least bit concerned about the sharp drop in sales, or the fact that more and more retailers are dumping its products on a near daily basis, or that it is rapidly becoming a laughingstock on social media.

“We believe that the strength of a brand is measured not only by the profits it generates, but the integrity it maintains,” Young told Business Insider. “The women behind the brand represent a diverse group of professionals and we are proud to say that the Ivanka Trump brand continues to embody the principles upon which it was founded.”

And what principles are those, exactly? Outsourcing? Nepotism?

A great discussion with two world leaders about the importance of women having a seat at the table! ???? pic.twitter.com/AtiSiOoho0