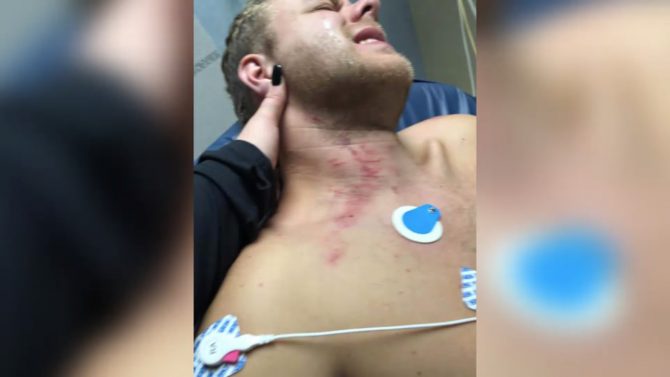 A same-sex couple in Charlotte, North Carolina claim that a group of men pretending to be police attacked them outside a bar Sunday evening.

Kenny Coppedge and his boyfriend Jordan Frye had just exited a bar when an unknown woman approached the pair and put her arm around Coppedge. The woman appeared drunk, so he just politely listened. Then a group of men–who also appeared intoxicated–accused Coppedge and Frye of stealing from the woman’s purse. Then things turned violent.

The men attacked Coppedge, pushing him to the ground, placing a knee on his neck, and shoving his head into the concrete. He suffered multiple deep scrapes to the neck and a gash above his eyebrow. The men claimed to off-duty police, and Coppedge says they behaved as if trained to restrain people. “They way they were maneuvering us, and the way they pinned us down–it was like they were trained to do it,” he says.

When the Charlotte police arrived, they first spoke to the intoxicated men and allowed them to leave. “I was told they talked to them and let them go,” Coppedge says.

Coppedge’s injuries landed him in the hospital for treatment, and the couple filed an assault report with police. Police now say they are looking for “unknown suspects” responsible for the crime.