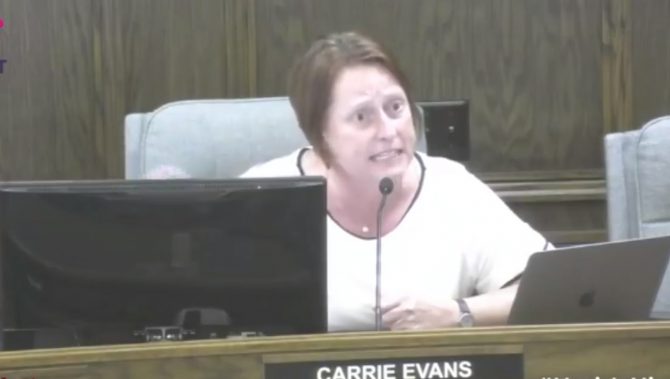 Attendees of a city council meeting in the town of Minot, North Dakota got a show they didn’t anticipate last week, as councilwoman Carrie Evans came out of the closet during the meeting to push back against an angry homophobe.

Minot had opted to raise a Pride Flag this month in celebration of the city’s queer residents. The flag was originally scheduled to run up the flagpole in June, but was delayed due to the COVID-19 pandemic.

Of course, raising the Pride Flag also triggered the town’s homophobes, who came to the meeting to air their complaints. As one man, a Mr. Walker, quarreled with the council over the flag, Carrie Evans dropped a bombshell.

“Mr. Walker, if you’re not aware,” Evans said, voice teeming with fury, “and I think a lot of people in this room are not aware, and have come here just because this is a gay issue, I am proudly the first openly elected lesbian in North Dakota. So that is why I am not paying any heed to your crap!”

“We, the people. I’m the people,” Evans went on. “I live in Minot. I am a taxpayer,” Evans added, on a tear. “I am a person. I get to see myself represented on that flagpole just as much as the people who got the Juneteenth flag last month, as much as the POW/MIA will get later this month.”

“Every single person is entitled to see themselves represented,” she continued. “We are not some group of people who live in San Francisco or Seattle. We are HERE. We are your elected officials. We are your brothers. we are your sisters, and don’t tell me you’re not hatred or anger. That’s all I feel. I’ve had to listen to it for days now, as has the mayor and many of my colleagues. It is unacceptable!”

“This city is big enough for all of us,” Evans concluded. “Me having a flag flying does not take away anything from your rights. But you know what it does for me? It shows me I live in a city that appreciates and embraces me, and my community. And I can live here and feel safe. That’s what it does. I’m sorry that it doesn’t make you feel comfortable, but we’re here, we’re queer, and we’re not going away!”

Evans’ remarks prompted at least one person in the room to burst into applause.

The Dickinson Press, a local newspaper that reported on the story, also claims that the incident marks the first time Carrie Evans has ever made her sexual orientation public. We’re kind of glad she saved coming out for a special occasion.