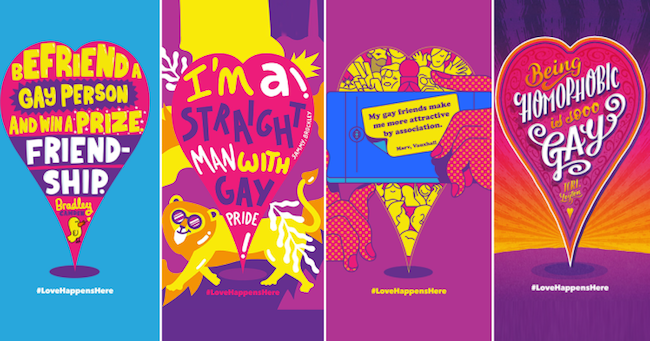 Irony has long been one of London’s most prodigious exports, but is it in short supply among its more literal-minded millennials? Are they suffering an irony deficiency?

The official posters for this year’s Pride In London celebration are being cancelled after a considerable backlash: People think the posters focus far too much on heterosexual people. People are particularly perturbed by the poster that says “Being homophobic is gay,” which they feel promoters a negative connotation for the word “gay.”

The images, innocently enough, were built around statements heard from Londoners on Pride, which an artist then interpreted into images for the online posters.

People are also upset the posters make no mention of bisexuals or the transgender community.

Imagine being a kid at school who dies a little every time they hear something called "sooooo gay" and then seeing this trash. pic.twitter.com/V4v1u1v3mt

'Most diverse pride' & not a single visibly bi or trans poster beyond two mentioning all LGBT. Hugely disappointing. https://t.co/QodoO0vE8g

As the BBC reports, even Gay Times‘ deputy editor Ryan Butcher is decrying the posters, saying the “execution has been abysmal”:

“The word ‘gay’ being used as a pejorative is one of the many reasons LGBTQ+ folk grow up with mental health problems, and are bigger suicide risks than straight people.”

Pride in London organizers ultimately decided to remove the images, saying in a statement:

“It is clear we misjudged the content of some of the messages in this poster series, undermining the individuality, importance, and dignity of the LGBT+ community.

This was never our intention.

We are genuinely sorry to have played any part in something that appears to devalue our own community.

Our ambition is, and always will be, to promote and celebrate the visibility and diversity of London’s LGBT+ community, to stand up against hate, and campaign for true equality at home and abroad.”

What do you think of the posters? Are they as offensive as the complaints suggest, or are people making a big deal out of nothing? Sound off in the comments below.