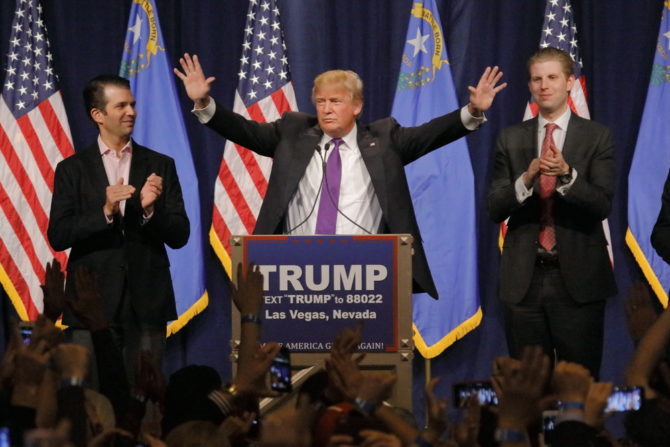 Days before taking office, Donald Trump shared this photo of his desk, a tall stack of his just-released Time magazine cover issue taking front and center among the assorted clutter:

Trump literally has an entire stack of Time Person of the Year Trump magazines on his desk (h/t to @ShaneGoldmacher for noticing). pic.twitter.com/LbdQd1C14T

So what if the article inside wasn’t exactly flattering (and that’s putting it lightly)? Details, details.

And wouldn’t you know it? The star of this still-life happens to be Don Jr. himself:

I, too, casually arrange photographs of my 100 children to face outwards so I can only see the backs of frames pic.twitter.com/Pa0cHP5ayj

Twitter was quick to point out that among the oddly front-facing photos adorning his desk was a solo picture of himself. It’s also the biggest photo of the bunch, and we have to assume the most amazing, fantastic and incredible, too.

Wait. Tell me the one dead center is just of him.

But there’s even more to ponder.

Did it go to him taking locks of Ivanka's hair while she sleeps, whispering, "why can't I be the favorite??"

And what’s with the bobble-head of Dad?

Lol I can see him saying, Daddy loves me best while flicking the bobble head Yes!!

Some theories were floated:

The frames are a protective wall, his children's innocent faces a shield. If this 1st line of defense fails, there are giant scissors….

Joke's on you, he can see them in the 10 ft mirror that's guaranteed to be on the other side of the room

I prefer to hang my framed photos of loved ones. Facing the wall of course. https://t.co/kas2FupGOg

But as one person pointed out, none of this should be all that surprising:

His photos shoots are all awkward af pic.twitter.com/LoVhqrVpyr