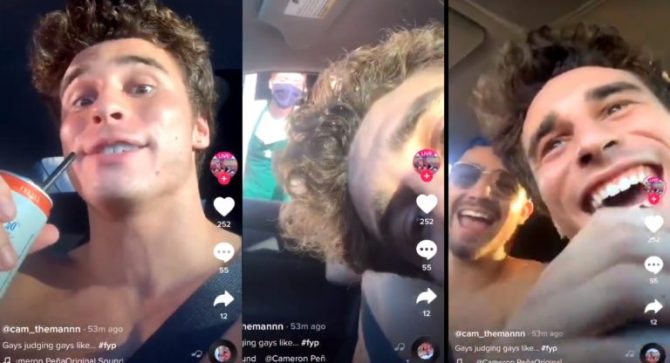 Cameron Joseph Peña is an aspiring TikTok star. He recently came under fire for posting a video of himself going through a Starbucks drive-thru and mocking the barista for having a “gay-sounding” voice.

“Alright you guys, we’re gay but this dude at the drive-in window at Starbucks is gayyyyy,” Peña tells the camera as he waits for his order before mocking the young man’s voice.

Peña then records the barista handing him and his companion their drink orders and politely saying, “Have a good day. Thank you.”

Because Peña is gay… making fun of another person for being gay… and broadcasting the person’s image to the world without consent and without considering how it might impact their life.

People on Twitter were not pleased about the whole thing.

I never hate comment on tiktok but I came across this earlier and had to say something. It’s vile.

What’s really upsetting is that what if the Starbucks employee isn’t out? And this guy has just broadcasted this video to the world. He’s from Clarksville, TN, which is a rural urban area of TN. Still lots of hatred and homophobia there that is hard to overcome.

This makes me sad. I thought the younger generation is our bright future. I thought wrong.

Lol his tik tok is private now 😂 he wanted the smoke and now he can’t handle it. He really tried it

This shit pisses me off so much it’s always WHITE gays having internalized homophobia, I’m not a violent person but they make me wanna become one lol

also I hope the Starbucks dude never sees this. dealing with that type of job is highly unrewarding you deal with shitty people every day. having someone say ‘have a nice day’ means a lot but it is heart breaking when someone doesnt mean it and acts like this.

I like watching these videos and then going to their TikTok profiles to see that they’ve gone private. Pure 🗑

Peña eventually issued an apology, saying he was “really sorry” and that he “should’ve never made fun of anyone.”

That could have been the end of it. Until he posted another video shortly after that saying people were being “over dramatic” and calling his critics “bitchy.”

You seem so APOLOGETIC here pic.twitter.com/3iPplh0YCK

Peña’s profile has since been set to private. Here’s hoping it stays that way.