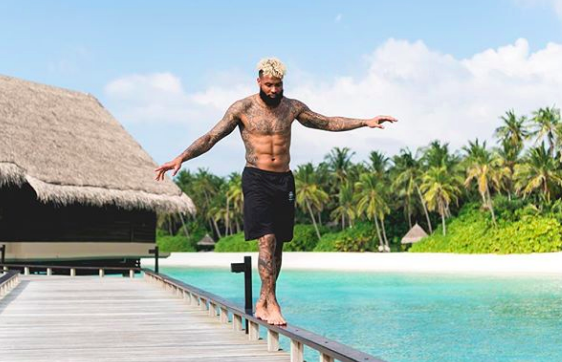 NFL star Odell Beckham Jr. is not having any of the homophobic nonsense currently being directed at him on social media.

This week, the Cleveland Browns receiver shared a thirsty photo from his upcoming Calvin Klein underwear campaign to Instagram, along with the caption: “Here’s a pic of me and a world class lamp.”

So far, the photo, which is part of a larger campaign that also includes Diplo, Gigi Hadid, Jacob Elordi, Lay Zhang, and Jelly Lin in “real-life” situations, has received over 800K likes and 22K comments, including several homophobic ones.

“Omm he gay,” another added.

“He low key gay tho,” a third person said.

“He tryna defend the fact that he’s gay,” yet another person added.

“It’s not too late to delete this breh,” wrote another follower.

Yallll chilllll mann damnnnn! It be a lot of y’all sayin sus and alll the other comments that realllly be a direct reflection of who u are! Im straight! Like beyond it. If I sit here and defend myself y’all gon say im tryna defend myself , if I sit there and say nothin yalll gon say ‘seee he didn’t say anything..’I’m good wit me. Which is dumb straightttt… Period. lol I don’t neeed to say this shxt no mooooo! Half y’all girls in these comments. This the last time ima break this shxt down for y’all. And lastly before I got hit the weight room! Much love to everybody out there! Fellas sorry man, gotta get a (bag) for it!

In a recent interview with GQ, Beckham addressed the gay rumors that have been following him around since 2015.

“I’ve never had an opportunity to talk about this,” he said. “Honestly wasn’t offended.  … It was almost more funny to me.”

Scroll down for more pics from Beckham’s Instagram page…

Mowgli from the Jungle Book… I’m really out here livin like it’s my last adventure…. #DemToeesHugggin ??

“My haters cant even get subliminal attention…”

All that ? u talkin make u sound insecure….

“The game was off balance, I’m back on my shxt”…. had to recenter myself.

“I came a long way from feeling numb…”

This the only way they talk about me… #SpeakUp ?

Errbody know that Vet move where u ask the question u already kno the answer tooooo ???… “so u said you want me to push on this one or pull?”

How can u ever grow… when they always tryna bury u?