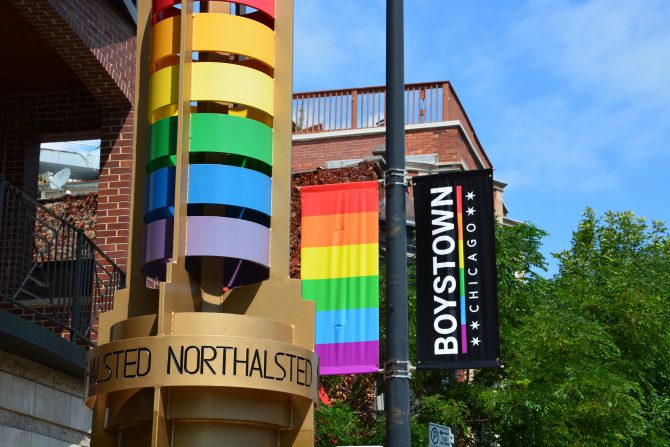 Chicago’s LGBTQ ‘hood has long been called ‘Boystown’, but business leaders have decided its time for a re-brand.

The move comes after a petition gained steam over the summer which described Boystown as the “only gendered nickname” of any city’s LGBTQ district.

“Systemic transphobia, racism, and sexism have plagued our neighborhood for decades, and it begins at the top, with the all-male board of the Northalsted Business Alliance. It begins with the BOYSTOWN signs down our street announcing that this neighborhood is ‘for the boys,’ though the signs hang above our diverse Legacy Walk of several LGBTQ icons in our history.

“To promote the inclusion of transgender, nonbinary, lesbian, and intersex individuals, we submit this petition for the Northalsted Business Alliance to simply follow the other LGBTQ neighborhoods across the world by marketing the area based on its location, North Halsted, not the majority gender of those people who sit on the Northalsted Business Alliance board This is only the beginning of the many changes needed in the North Halsted area.”

The petition gained over 1,500 signatures, although a counter-petition to keep the name had over 2,000.

After the initial petition was launched, the Business Alliance conducted an online survey around the name “Boystown”; 1,580 people reported feeling unwelcome by the name.

“It definitely felt like we should be doing something about it,” Northalsted Business Alliance spokesperson Jen Gordon told the Chicago Tribune. “If it was making even a small percentage of people feel uncomfortable, it’s not something we should be using to promote the neighborhood.”

‘Boystown’ was a nickname that the area earned in the late 80s and early 90s. It became so common that it was formally adopted by the Northalsted Business Alliance, and adorns banners around the area. In 1997, then Chicago Mayor Richard Daley affirmed the area (Halsted Street from Grace Street to Belmont Avenue) as the first official gay neighborhood in the U.S.