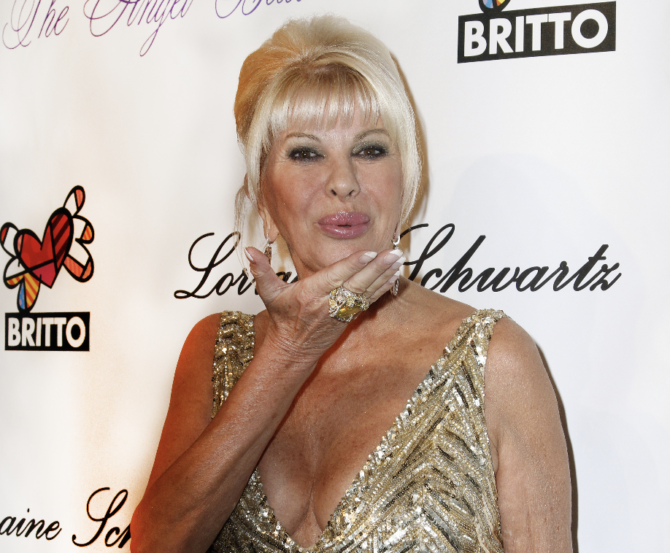 Related: Donald’s first wife Ivana to pen parenting guide… because she did such a great job with her own kids

Photos of her gravesite began circulating on Twitter over the weekend and, well, we think the images speak for themselves:

Doubt there is a new low? This is the miserly grave of Ivana Trump, also known as a tax break for her ex-husband. pic.twitter.com/Tozbyp33LY

Yes, that is actually Ivana Trump’s current gravesite. And no, this is not a joke.

Now, you may be wondering why anyone would be buried on a golf course. Turns out, it might all be part of Trump’s tax evasion strategy, er, plan. Surprised? Neither are we.

Related: Now Trump might be losing the lease on his golf course in West Palm Beach

New Jersey tax code exempts cemetery land from all taxes, rates, and assessments. By burying his ex-wife on his golf course, Trump now has yet another way of avoiding taxes on the 520-acre property. Or at least on the approximately 10-acres around where Ivana is buried.

He already gets a deep discount by growing hay and raising a small herd of goats on the land, which allows him to claim the estate is used for “agriculture”, thus qualifying it as “farmland”, which reduces his tax bill from $80,000 to less than $1,000.

New Jersey’s tax code also exempts cemeteries from from business taxes, sales taxes, income taxes, and inheritance taxes. It doesn’t take much to see where this is going.

Related: Yet another one of Trump’s properties is in dire financial straits with no hope in sight

Brooke Harrington, professor of sociology at Dartmouth college in New Hampshire, dug into the matter and discovered that, yep, the whole thing appears to be a “trifecta of tax avoidance.”

On Saturday, she tweeted: “As a tax researcher, I was skeptical of rumors Trump buried his ex-wife in that sad little plot of dirt on his Bedminster, NJ golf course just for tax breaks. So I checked the NJ tax code & folks…it’s a trifecta of tax avoidance. Property, income & sales tax, all eliminated.”

As a tax researcher, I was skeptical of rumors Trump buried his ex-wife in that sad little plot of dirt on his Bedminster, NJ golf course just for tax breaks.

So I checked the NJ tax code & folks…it's a trifecta of tax avoidance. Property, income & sales tax, all eliminated. pic.twitter.com/VDZBlDyuhQ

In 2015, Trump received the approval to build a family cemetery at his Bedminster golf course that would include a classical mausoleum. The twice-impeached ex-president has indicated that he wants to be buried there after he dies.

“It’s never something you like to think about, but it makes sense,” he told Page Six in 2007. “This is such beautiful land, and Bedminster is one of the richest places in the country.”

Doubt there is a new low? This is the miserly grave of Ivana Trump, also known as a tax break for her ex-husband. pic.twitter.com/Tozbyp33LY

Trump buried his ex-wife Ivana — whom he raped & cheated on with Marla Maples — at his Bedminster Club for a tax break. Then, he played golf on her grave while taking Saudi Arabian blood-money. I never want to hear the media criticize Biden for spending the weekend in Delaware.

Ivana's grave might be the most bizarre thing yet about the Trumps.

My God, what is wrong with these people? pic.twitter.com/NsXsN2i7Um

The Ivana story got even worse

By burying her in a pauper’s grave at his golf course, Trump has evaded property, sales & income taxes

Worst of all her kids let it happen! Ivanka desecrated her own mom, who has become in death nothing more than Trump’s latest tax evasion scheme

Ivana Trump’s Grave site …. ?Hmm can’t help but wonder if Melania had anything to do with the planning? pic.twitter.com/T0W8Qfjw6k

After they arrest Trump, they should dig up Ivana’s grave and see what he really buried there.

When I saw this earlier, I thought it was a joke. Then I Googled it. Who gets buried at a golf course? And how can Ivana rest with Trump sweating over her grave all the time? pic.twitter.com/0sKkyo1amy

I wouldn't be surprised if Trump asked for money to allow people to visit Ivana's grave.

It will look better once they install the putt putt windmill for the trick shots. pic.twitter.com/SSLHA2WheY

Now that we know Ivana Trump is buried next to the first hole of Trump’s golf course, we can assume that Melania will be buried on the third hole. Right?