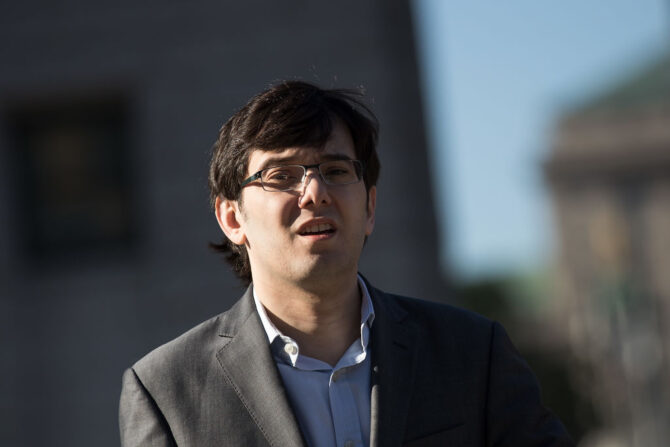 Hide your wallets and your Truvada because Martin Shkreli (a.k.a. Pharma Bro) was just released from prison after serving part of a seven-year sentence.

The ex-pharmaceutical investor made headlines in 2017 when he jacked up the price of Daraprim, a life-saving AIDS medication, by 5000%–from $13.50 to a whopping $750 per pill–while working as CEO of Turing Pharmaceuticals in 2015.

Related: “Pharma Bro” Martin Shkreli found guilty of fraud and nobody is more shocked than him

In a statement, the U.S. Bureau of Prisons said Shkreli had been transferred from a federal correctional facility in Pennsylvania to a “community confinement” program, where he will remain in federal custody until September 14.

The 39-year-old posted a photo to Facebook announcing his release by saying, “Getting out of real prison is easier than getting out of Twitter prison.”

In 2018, Shkreli was sentenced to seven years in prison after being found guilty of defrauding investors in two hedge funds and a former drug company. In addition to the prison time, he was ordered to pay $7.4 million and he was barred for life from running a public company or working in any capacity in the pharmaceutical industry.

Last month, his lawyers asked to withdraw from representing him after he stopped paying his legal bills. They said Shkreli, who was once worth millions, “has no assets” with which to continue to pay the fees.

martin shkreli has been released just in time for white boy summer pic.twitter.com/O07lQpBi8m

Damn, I was having a pretty decent day until I learned about human genital wart Martin Shkreli being released from prison. Bummer

Martin Shkreli raised the price of HIV drugs 5,000% overnight, and there are people on this bird site celebrating his release from prison today.

WTF is wrong with people?

Its perfect timing. Martin Shkreli wouldn't want to miss out on world inflation.

If a shithead like Martin Shkreli can have a cult of personality online, there's hope for all of us to get our own groups of obsessive weirdos.

Martin Shkreli has been released from prison. It would be cooler if the judge had told him he would be released today, then said “JK I mean in 7 years” and slam dunked the gavel.

Oh great, #PharmaBro has been unleashed on society again. We should have Sociopath Alerts, like we have other warnings. #MartinShkreli

Only question now is how long until Martin Shkreli is on Joe Rogan/Alex Jones?

?Martin Shkreli has been released and I wish him nothing but the absolute fucking worst.? pic.twitter.com/V11yRVxjbr