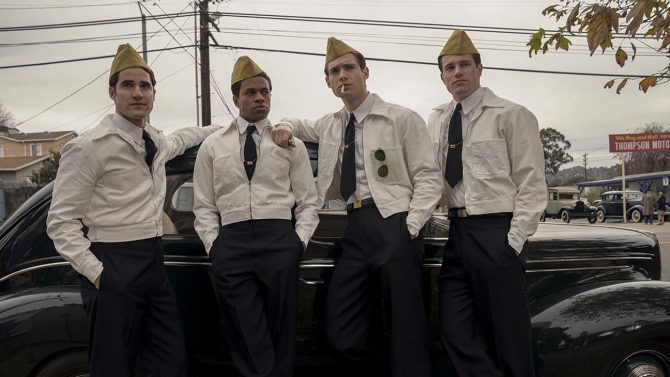 We were already planning to watch Hollywood, Ryan Murphy‘s newest Netflix offering (available to stream May 1st), but star Jim Parsons just sweetened the pot. According to him, the show features lots of envelope-pushing male nudity, in addition, we assume, to compelling characters and drama.

The limited series focuses on an aspiring group of performers (some fictional, some based on real people like Rock Hudson) who come to post-World War II Hollywood in hopes of making their dreams come true. Unfortunately they encounter the same kinds of prejudices–homophobia, racism, sexism–that pervade the rest of America at the time. The group also encounters Tinseltown eccentrics, ranging from nutty actors to the diva wife of a studio boss to a hustler that runs a brothel out of a gas station.

Speaking via videolink to Ellen at her $24 million prison, Parsons recounted one particular pool party scene that he found “really awkward and shocking at first” because of all the nude extras floating around the set.

“I mean, I’ve gone to a lot of gay clubs in my time, and I’ve never seen that many naked people at once, ever. Well, I mean, I don’t think that’s legal in most places,” Parsons said.

“But it was really awkward and shocking at first, we were surrounded by so many naked people, and I just kept trying not to look, but there really came a point – I mean, it was hours we were doing this – where I stopped not trying to look at some points.

In advance of Friday's premiere of HOLLYWOOD, Netflix is giving a sneak preview of the first three episodes to residents of the MPTF home. Netflix is also donating an additional $100,000 to its industry fund benefitting the MPTF which I am personally matching. Making Hollywood as a revisionist fable of our Golden Age showed me what can happen when people band together in the face of adversity. I'm honored to be able to provide support during this difficult time for residents of the MPTF, many of whom built this industry and created entertainment that continues to inspire so many of us still today.

“I was just like, you know what? What I really feel is admiration, to have that kind of relationship with your body that you’re able to just walk around naked in front of the huge crew, and all these other actors and everything, in and out of the swimming pool, I was like, ‘I am in awe’. That is the healthiest, I think, type of [mindset].

“Now, I want to add, there wasn’t a bad looking one in the bunch, so they worked for that confidence – or they were born with it, I don’t know.”

Season one of Hollywood premieres on Netflix on Friday, May 1.