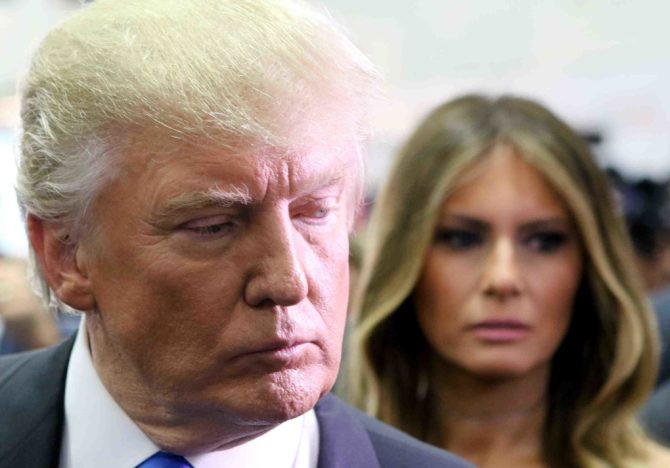 A new waxwork of Donald and Melania Trump was just unveiled at the Madame Tussauds museum in Dubai and it’s… something else.

The effigy of Trump can be seen sporting his signature red tie while seated at a desk with his eyes glued to his phone instead of his wife, who stands several feet away with her legs awkwardly crossed and looking not dissimilar to an embalmed human corpse that’s been propped up on display.

These are the statues of Trump and Melania from Madame Tussaud's in Dubai. Melania is reportedly upset that the piles of cheap suitcases filled with cash and drugs have been removed pic.twitter.com/uMqbKPHBeQ

Honestly, we’re not sure which is more offensive: This latest wax figure of the ex-FLOTUS or that weird wooden statue of her created by a chainsaw artist that stood in her hometown of Sevnica, Slovenia for about a year before someone lit it ablaze.

It’s unclear what’s on Trump’s screen in the new waxwork unveiled this week, but it’s probably not Twitter or Facebook since he was banned from both platforms after he incited that deadly insurrection on the U.S. Capitol on January 6.

But one thing is very clear: He’s much more interested in his device than he is in his own wife.

The wax figures each took over six months to create by a team of 20 artists at an art studio in London. The wax was poured into metal frames and then sculpted with clay. Real human hair was used on them, with each strand carefully implanted using small needles.

Of course, this isn’t the first time wax figures of the ex-president and his wife have made headlines.

In 2017, a topless feminist protester groped a statue of the then-president during its official unveiling at the Madrid Wax Museum in Spain. Madame Tussauds Berlin placed its version of Trump into a dumpster before the 2020 election. Madame Tussauds London dressed its Trump statue in golf clothes following his election loss to President Joe Biden. And in March, Louis Tussaud’s Waxworks in San Antonio, Texas, removed its Trump waxwork because customers kept punching it.