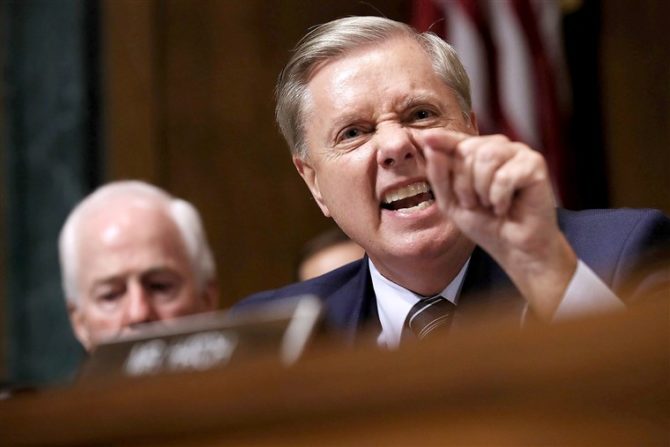 Never in a million years did we think we’d be writing a post defending Lindsey Graham, but hear us out for a sec…

Last week, Donald Trump’s Supreme Court nominee Brett Kavanaugh testified before the Senate Judiciary committee in what will likely go down in history as the most bizarre and incendiary judicial interview process in history.

During the hearing, Graham, who has long been dogged by gay rumors, had an emotional outburst, shouting his support for Kavanaugh and calling the whole hearing an “unethical sham” and “the most despicable thing I’ve seen in politics.”

It was quite dramatic, to say the least.

Many responded to Graham’s tantrum in a way one might not expect from people who identify as liberal or progressive… by hurling antigay slurs while cracking misogynistic gay jokes about the senator.

“Donald Trump knows I’m a closeted gay man and is holding it over my head.” -Lindsay Graham.

you idiots missed his LIES to that same committee in the bush years so like. go fuck yourself, you stupid fag @LindseyGrahamSC

I've got a funny feeling that @LindseyGrahamSC Graham is gay…… what do you think??e pic.twitter.com/qALNVCSv0h

Well and @LindseyGrahamSC and his live-in campaign manager oh I mean lover. I am a gay man and think it's time we doing another outing like in 2004-08 on politicians.

The sad thing about @LindseyGrahamSC, is that the thing he worries the blackmailer will reveal is already common knowlege. We all know you're gay, Lindsey, and it's OK. It's 2018 for christ's sake.

. @LindseyGrahamSC is a closeted gay republican right? That’s why he’s so angry?

Let's try to have a little patience in our hearts for .@LindseyGrahamSC . It has to be hard living as a closeted gay man in the South, for so very long. Then on a national stage. It's so hard, he hates himself. And his hate spills over. Love you brother. Be best.

Okay one of you fags has hooked up with Lindsey Graham—who is outing him?

A post shared by AsTheWhiteHouseBurns (@asthewhitehouseburns) on Sep 30, 2018 at 6:49pm PDT

?We have it on good authority…?

Entertaining myself in studio on a Friday night after a too long news week thought it might be fun to up date one of my old good girl posters. . . . . #lindseygraham #stopkavanaugh #judiciarycommittee #goodgirlproject# #pambutlerart #polticalposters

Even Saturday Night Live got in on the action by having Kate McKinnon impersonate 63-year-old Graham in a skit that included no shortage of jabs at his rumored sexual orientation.

Now, we totally get it. Lindsey Graham is not a good guy and certainly no ally to the LGBTQ community.

Not only did he oppose the repeal of DADT and gay-inclusive immigration reform, but he was also staunchly against gay marriage, calling it a road to polygamy.

And the way he behaved last week was embarrassing both for himself and for the country.

But surely there are ways to criticize him that don’t involve cracking lame gay jokes or, worse, using homophobic slurs against him?

What do you think? Sound off in the comments section below…