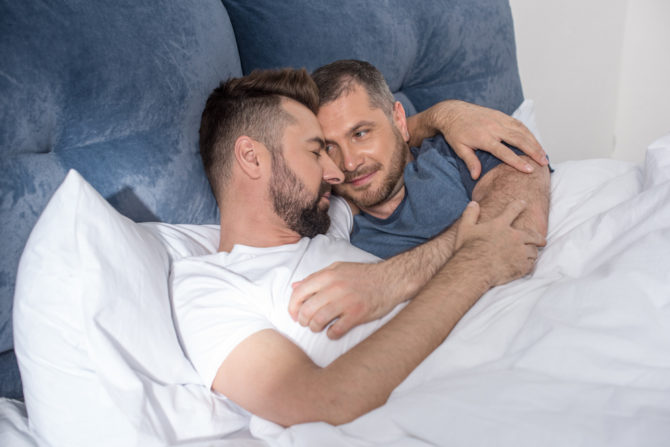 20-something blogger Anthony Gilét recently found himself in what he felt was an awkward predicament.

One morning, he heard his older roommate, Matt, hooking up with his best friend, Mitch, who has a boyfriend, who also happens to be Matt’s ex. And all three of them–Matt, Mitch, and the boyfriend/ex-boyfriend–are friends.

In a new op-ed, Gilét writes:

Apparently Matt and his ex were on good terms. (Although not quite good enough to resist pounding his new man). Too close for comfort? Turns out Matt too has a boyfriend, with whom he adopts a “don’t ask, don’t tell” policy when it comes to playing with other men. And apparently the four of them hang out together regularly. Can you EVEN?

When Gilét asked his roomie how he is able to have sex with his best friend, who happens to be his ex-boyfriend’s new boyfriend, and remain on OK terms, Matt replied: “I have a lot of friends that I’ve met on Scruff!”

“I found it surprising that someone’s relationships–especially friendships–could be so sexually-driven,” he writes. “I’d encountered a number of gay men throughout the years who seemed only to have ‘friendships’ with former f*cks or failed flames. Was I missing something?”

Matt explained that hooking up with his friends was something they did “for fun,” but Gilét wondered if this was actually true. (Apparently, he’s completely unfamiliar with the concept of “friends with benefits.”)

“His excitement reminded me of somebody that had just discovered circuit parties and was still swept up in the facade of three-day benders.”

Sure, friendships are hard to form, but you have to at least try for them. It seemed that a lot of these ‘friendships’ revolved around drinking, drama and very little depth – and some men thrive off that. Don’t get me wrong, I’d watch that reality show for sure. But in real-life doesn’t that just bring aggravation?

After giving it some serious thought, Gilét says he couldn’t figure out “whether these guys were addicted to the drama, had deceived themselves that sex is more valuable than friendship, or were just out of options.”

Ultimately, he concluded the reason Matt and his friends all hook up with each other is their advanced age. (They’re all a few years older than Gilét.)

“To a certain extent, it’s hard to make friends whatever age, especially on the gay scene,” he pontificates. “Surely that difficulty only increases with age?”

Related: Is Your Friend With Benefits Boyfriend Material? This Handy Flowchart Will Tell You.

The “logical explanation” he came up with that the older one gets, the harder it is to meet friends, “so naturally men gravitated toward the likes of Scruff and Grindr for companionship and form friendships with their f*ck buddies.”

The remedy to this? Gilét says gay men need to see each other more “as brothers, rather than competition or conquests.” In doing so, “separating friendships and healthy loving relationships might be a little easier than it currently is.”

What do you think? Do gay men need to do a better job separating friends from lovers/hookups? Is age to blame for so many gay dudes having sex with their buddies? Can you have a “healthy, loving relationship” with a friend you have sex with? Share your thoughts in the comments below…